The Lost Tomb of Jesus and Ovaltine

One of my favorite movies is the holiday-themed A Christmas Story. Every year as Christmas approaches, I pull out the tale of Ralphie, a 1940's kid who listens to Orphan Annie on the radio and pines for "an official Red Ryder carbine action two-hundred shot range model air rifle with a compass in the stock and this thing that tells time." 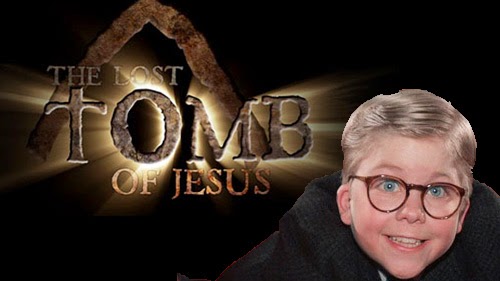 One scene in the film shows an excited Ralphie receiving his Orphan Annie secret decoder pin. After transcribing the radio code, he locks himself in the bathroom, working feverishly to crack Annie's urgent communiqué. Ralphie wonders, "What could this important code from Annie be?" The message finally translates to "Be sure to drink your Ovaltine" and Ralphie is crushed that he placed all his faith in a "crummy commercial".

That's the way it is for many folks in Hollywood. They want to sell you the illusion, and make money off it in the process. Even if there is no real danger or real secret, they'll make it up just so they can market something to an unsuspecting public. As an example, let's look at the Discovery Channel's special from a few years ago, The Lost Tomb of Jesus. Produced by James Cameron of Terminator and Titanic fame, and directed and narrated by Simcha Jacobovici, the show tries to claim that "the 2,000-year-old ‘Tomb of the Ten Ossuaries' belonged to the family of Jesus of Nazareth."1

They further try to press the point that this somehow deals a fatal blow to the New Testament. James Cameron states in an interview that "Faith and forensics make very uneasy bedfellows.. Faith implies essentially the lack of a need for evidence… The scientific method is in direct opposition to that. You have to investigate, you have to find the proof."2 Jacobovici tantalizes us with lines such as "The New Testament doesn't say that Jesus had a son, but perhaps in this instance, archaeology forces us to throw a different light on the New Testament".3


What We Know About the Tomb

Is there reasonable evidence to believe that a Jewish burial tomb containing Jewish burial boxes from the first century held the remains of Jesus of Nazareth and his family? When we look at the evidence, what we find is that Cameron and Jacobovici are more interested in selling the idea that what they found is new evidence than producing actual evidence for a find. We have a two-hour television special that is nothing more than hype with no substance. First, let's strip away the hyperbole and see exactly what was found.

Facts from the Special:
From these facts, the filmmakers make all kinds of assumptions. First, the coffin marked "Jesus, son of Joseph" pricks their interest. They then note that all the names in the tomb are also found in the New Testament. They believe that since the Mariah ossuary uses a Latin version of Mary, this could likely be Jesus' mother, since she was known by the Latin version of her name. They believe that the Mariamne box held the bones of Mary of Magdala, who would be Jesus' wife, since she is not a blood relative of the family.

I think even a cursory look at the actual evidence and the conclusions that the show tries to draw demonstrate just how much the filmmakers are straining to make a connection. Let's take the names as an example. Dr. Darrel Bock pulled data from Richard Baukham of St. Andrews, in his book Jesus and the Eyewitnesses. He gives us a breakdown of name frequencies in first century Palestine:

For women, we have a total of 328 occurrences (women's names are much less often recorded than men's), and figures for the 4 most popular names are thus:

You can see at once that all the names you're interested were extremely popular. 21% of Jewish women were called Mariamne (Mary). The chances of the people in the ossuaries being the Jesus and Mary Magdalene of the New Testament must be very small indeed."5

Of course, you never hear that 122 tombs have been found with the name of Jesus and that Joseph is the second most popular name discovered on ossuaries. Or, the show doesn't report that an ossuary in 1926 was found with the same "Jesus, son of Joseph" inscription.

The authors next try to impress us with the facts that another other ossuaries bear names identical to Jesus' brother, Joses (Joseph). While this may be true, we saw that Joseph is the second most common name in first century Palestine. But what about Jesus' other brothers? If this is a family crypt, where are James, and Simon, and Judas? The Judas we have in the tomb is the son of Jesus, not his brother. And who is the Matthew? We have no history of a Matthew as being a living blood relative during Jesus' time.

Of course the fact that there's a tomb at all causes all sorts of problems. First, Jesus' family was too poor to afford a rock -;hewn tomb which was quite expensive in that day. Even if they could afford one, though, the family resided in Nazareth, not Jerusalem. Why wouldn't the entire family have a crypt there?

Next, you come to the problem of the reports of the empty tomb itself. Bodies take about a year to decompose before they are ready to be placed into an ossuary. If Jesus' family had a tomb in Jerusalem, do you think that the leaders of the Sanhedrin would have gone to find it and squash the Christian young Christian movement before it started? And why would all the apostles, including Jesus' brothers James and Jude, die martyrs' deaths without even one of them recanting and confessing that they made the resurrection story up.

Finally, we have DNA evidence that proves, well, nothing at all. So Mariamne wasn't related to Jesus. So what? This doesn't make her his wife. She could have been Matthew's wife, or Judah son of Jesus' wife. It's a huge stretch to try and connect two people in a civil union just because they aren't blood relatives.


An Attempt to Sell

There are more problems, but space prohibits me from going into any further detail. In fact, there are so many more problems with this "lost tomb" that Professor Amos Kloner, the respected Israeli archeologist who was in charge of the initial examination of the tomb and its contents says that the special is nothing more than a marketing ploy. Kloner remarks, "The claim that the burial site [of Jesus] has been found is not based on any proof, and is only an attempt to sell. I refute all their claims and efforts to waken a renewed interest in the findings. With all due respect, they are not archeologists."6

Like Ralphie in the Christmas movie, I hope that folks take a skeptical look at specials like this and see them for what they really are: empty messages that are nothing more than people hoping to make money off controversy. Perhaps the Discovery Channel needs to get some cross-play between their shows. I'm sure that someone with the skepticism of the MythBusters would be able to see the flaws in this special and take it for what it really is: a two-hour "crummy commercial". 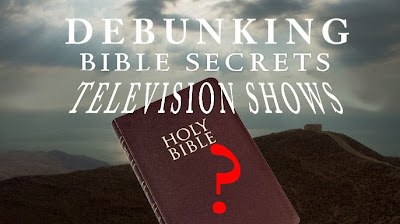 Every year before Christmas and Easter, the media turns to stories about religion to try and boost their audiences. Like clockwork, the History Channel has just begun a series titled "Bible Secrets Discovered". This is the latest in a genre (including "The Bible's Buried Secrets," "Jesus Family Tomb" and others) that seeks to publicize some novel scriptural understanding that undermines the Bible's credibility. Are their charges true?

Below is a four-part audio series plus a two page downloadable PDF outline where I show how these 'Bible Secrets' shows engage ins a bit of misdirection to achieve their goals. More P.T. Barnum than true scholarship, when examining the facts thoughtfully, one can quickly see why these shows present an emperor who has no clothes.