The Reformation: A Great Schism or Necessary Change?

In this special edition of the Come Let Us Reason Together podcast, Lenny sits down with Reasons to Believe Senior Research Scholar Ken Samples to discuss the 500th anniversary of the Protestant Reformation. It was on October 31, 1517 Martin Luther nailed his famous 95 theses on the door of the Wittenberg church. That act launched one of the most significant changes to western civilization humanity has ever seen.

In this extended podcast, Ken and Lenny discuss the reasons for Luther’s grievances, why the Reformation made the impact it did, how the sharing of the Gospel was affected through the  Reformers, as well as some of the criticisms and problems that emerged from dividing the church.

Atheism and the Illogic of Rejecting All Possible Gods 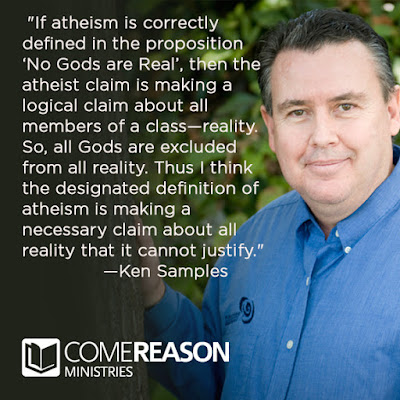 In one of my previous articles, I posted an anecdote Ken Samples recounts in his book A World of Difference. There, Ken engages with an atheist who agrees that the atheist position is "no god or gods are real" or that "no god or gods actually exist." That led Ken to ask, "doesn't the atheist, for his claim to be real, have to know all about reality and existence to rightly exclude any and every god. For example, to claim with any validity that there are no entities of a particular type (gods) in a given circle or set (reality), doesn't a person need a complete, comprehensive knowledge of that circle or set (reality)?"

The implication is that the claims of this kind of atheism are very grand indeed. However, not even all Christians are convinced of this line of argumentation. There were several comments left on the original post that you can read here and most were from atheists. Yet, one comment I received from a Christian, Daniel Wynn, told how he believed Samples overreached on this issue. He writes:


I like Ken Samples, but I have to disagree with him here. He says, In other words, as a point of logic, "doesn't the atheist, for his claim to be real, have to know all about reality and existence to rightly exclude any and every god?"

It would be similar to saying that as Christian theists we would have to know all of reality to show that none of the competing god ideas in the world are true. I don't think so. I think if we have warrant for belief in YHWH, then we can rest in the logical entailment that competing worldviews are false. Evidence for our view is by default evidence against the competing views.

That's a thoughtful objection worthy of consideration. I asked Ken to respond to Daniel's objection. Here is his reply:


Some thoughtful Christians have disagreed with the point of my argument (which was drawn from a real story but was used primarily to provoke thought as the logic chapter begins in chapter 3 of my book A World of Difference).

Here' why I think my point stands up logically:

In the categorical proposition E (Universal Negative): "No S are P." both the subject term (S) and the predicate term (P) are distributed. A term is said to be distributed if the statement or proposition "makes an assertion about every member of the class denoted by the term." (Patrick Hurley, A Concise Introduction to Logic, 11th ed., p. 202.)

In the E proposition both the subject term and the predicate term are both distributed—meaning that both terms make a claim about all members of a class.

So logically [No S are P.] can be translated in terms of distribution to mean in non-standard form "All of S are excluded from All of P."

Let's now plug in the statement taken from my story in chapter 3.

It means All of S (Gods) are excluded from All of P (reality). So if atheism is correctly defined in the proposition [No Gods are Real.], then the atheist claim is making a logical claim about all members of a class—reality. So, all Gods are excluded from all reality. Thus I think the designated definition of atheism is making a necessary claim about all reality that it cannot justify. Thus as I write in the story: "To claim with any validity that there are no entities of a particular type (gods) in a given circle or set (reality), doesn't a person need a complete, comprehensive knowledge of that circle or set (reality)?"

If my logical analysis is correct, I think it is epistemologically significant that the rules of logic indicate the atheist proposition to be unjustified.

The alternative propositional affirmation "No Gods are existent." also for the same reasons makes a logical claim about all existence.

As to the stated objection, the point of the story is not whether an individual atheist thinks he or she is personally warranted in disbelieving in God because of an apparent lack of evidence, but whether the knowledge claim of atheism itself as defined above is logically justified. Moreover, my personal experience is that many atheists are comfortable affirming a strong claim that No Gods are real. But if the atheist affirms a weaker claim of mere epistemological warrant, then why not ask if the atheist is in the best position to make judgments about reality and existence as a whole. So in an apologetics discussion you could consider critiquing the stronger atheist claim and then transition if necessary to the more modest atheist claim.

Regarding knowing all gods are false but Yahweh (the Triune God of Christianity), my thought is that it seems there is a difference between how the Christian theist's knowledge claim is justified as opposed to the atheist. Namely the Christian appeals to revelation from a transcendent God whereas in some sense the atheist relies on his own limited investigation. Yet I can also attempt to show that other concepts of God appear to be incoherent. However, that's just a quick thought.

But as I said, I know some Christian thinkers disagree with my argument. There may be no universal way of knocking down all atheist claims. But in terms of a story in a book taken from real life that is intended to make a student think, maybe I have succeeded quite well.

In closing let me say that I appreciate Come Reason Ministries very much.

I liked this quote because it shows that the claims we make about the nature of reality must be based on proper warrant. I see God as the best explanation of all the evidence we have as to why the universe exists and why it is the way it is. To me, Ken's approach removes some of the dogmatism of atheism, and when those presuppositions are removed, a more thoughtful examination of the evidence can take place. It opens conversations.

I extend a big than you to Ken Samples for taking the time to offer his response. If you don't yet own A World of Difference, you can get that book here.
Posted by Lenny Esposito at 11:24 AM 1 comment:
Labels: apologetics, atheism, Ken Samples, logic, quotes, witnessing
Older Posts Home
View mobile version
Subscribe to: Posts (Atom)