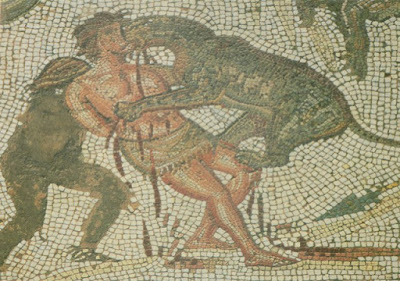 Today is a significant date in Christian history, for it was on February 24, 303 AD that the edict was issued by Roman Emperor Diocletian that began the first empire-wide and most bloody persecution of Christians. Prior to 303, Christians had been persecuted in various provinces of the Roman Empire, but this was different. It was systemic and all-encompassing.

The Diocletian Persecution is important partially because of how it began. Historian W.H.C. Frend explains the crafting of the laws that launched the persecution:


The persecution resembled Valerian's more than Decius's. It had been carefully planned and the consequences had been weighed. Diocletian recognized the danger of making Christians martyrs. No blood, he insisted, must be shed. The aim was to recall the Christians to their duty of recognizing the majesty of the Roman Gods. The edict he promulgated on 24 February ordered throughout the empire churches were to be destroyed, and the sacred books of the Christians handed over to be burned. Christians in public offices were to be removed from them. In private life Christians in the upper classes (honestiores) were to lose their privileges. In particular, they could not act as plaintiffs in cases of injury, adultery, or theft. Christian slaves might not be freed. But there was no requirement for universal sacrifice. The attack was concentrated on the organization of the church, its life as represented by the Scriptures and buildings, and on its influential members. (Emphasis added.)1

Notice the thought process by Emperor Diocletian who had to initially be convinced to issue the edict. We're not going to force people to worship Roman Gods. It's simply the duty of those who enjoy the benefits of Rome's governance to recognize there is a social standard to which they must adhere. Thus, Christians should be removed from public offices since their Christian beliefs run counter to the beliefs the state wishes to promote. Wealthy Christian businessmen should lose any protections they hold, especially those that would protect them legally. The church as an organization should be attacked as a wrong-thinking institution. But no blood should be shed and Christians can believe what they will in the privacy of their own homes.


The Loss of Freedom Today

Of course, we are not in Diocletian's Rome. Frend spends several pages discussing why conditions in the Empire at that time made the persecution more likely than before. Those conditions do not exist today and I'm not arguing that we are heading for another Diocletian Persecution. However, the trend to weaken religious freedom is increasing, and many of the justifications used sound eerily familiar. If you're a Christian court clerk in Kentucky who refuses to sign a marriage certificate, people demand you be removed from public office. If you are a baker or wedding photographer, your beliefs and your conscience are secondary to what the state feels is moral. Here's how the Harvard Law Review summarized the judgment against one such photographer:


Justice Bosson concluded that "[i]n the smaller, more focused world of the marketplace, of commerce, of public accommodation, the Huguenins have to channel their conduct, not their beliefs, so as to leave space for other Americans who believe something different. . . . [I]t is the price of citizenship."2

The freedom of religion is often referred to as the "First Freedom." In the United States, it is the first freedom to be recognized in the Constitution's Bill of Rights, but it is the first freedom in more ways than that. Without the freedom to not simply "do whatever we want in the privacy of our homes," but to incorporate our beliefs into our broader lives, we are not truly worshiping freely. It is the state that is setting the rubric of what counts as true beliefs verses what counts as inconsequential beliefs. How much can you belief something if it never affects the way in which you live? The short answer is: you can't. By dictating which beliefs must be sacrificed for the price of citizenship is effectively setting a state religious litmus test.


Escalating from Legislation to Volience

The second reason why we should remember the Diocletian persecution is how quickly it elevated from a calculated, no-blood political move to an all-out blood bath against Christians. The Christian History Institute sums it up nicely:


Before the end of the year, Diocletian issued two more proclamations against Christians and Maximian issued a fourth the following year. One ordered the imprisonment of Christian teachers, filling the prisons with bishops and clergy. The next ordered that these prisoners either sacrifice to the pagan gods or be tortured. The third directed that all Christians should be required to sacrifice on pain of torture.

Christians suffered terribly, especially in the eastern empire. Some were thrown to wild beasts, others burned alive or roasted on griddles. Some were skinned or had their flesh scraped from their bones. Others were crucified. A few were tied between trees that were bent so as to meet and, when the branches were released, the force ripped these victims limb from limb. Eventually the Romans wearied of this and set the remaining Christians to work in mines or gave them menial jobs. In many instances, they gouged out an eye or maimed a hand or foot before sending the workers off. From this period come many notable martyrs, including the young girl, Agnes of Rome.3

While the powers that be began in limiting their scope of the edicts, it quickly grew out of control. The tortures were fierce and had gone beyond what the designers had imagined. Even those Christians who had adopted Roman customs were not immune. Frend writes, "For some, the Persecution must have come as a great shock. Even in towns where they were most numerous, we find Christians sharing fully in the Greco-Roman culture, taking part in city life as councilors, and not adverse to references to Hades and the Muses on their tombstones."4 To have assumed those who just "go with the program" or one who agrees with the state and capitulate to its edicts means they will not be targeted was mistaken. Just the name "Christian" was enough to condemn one to death or to slave labor.

AS we mark the anniversary of the Diocletian Persecution, we should consider these things and think about what we risk in our own society. People are people and they tend to repeat themselves. What lessons should we learn before we allow our religious freedom to be adjudicated into something less than an irrevocable right held by all mankind?