Has Archaeology Proven the Gospel of John? 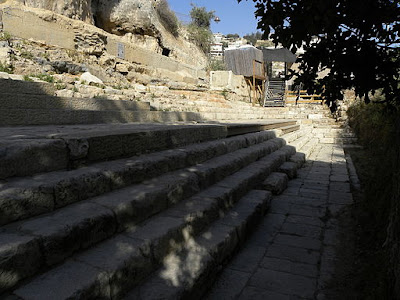 Charisma News published a web article last week with the bold headline "Pool Where Jesus Healed a Blind Man Discovered, Proves Gospel of John Is True." It opens with the claim "Archaeological evidence now proves the Gospel of John is true," then references both Eric Metaxas and a Los Angeles Times article that quoted Princeton New Testament scholar James H. Charlesworth. The claim is irresponsible.

Before we go too far, let me first say that the discovery of the pool of Slioam is a significant find for biblical archaeology. Discovered in 2004, it offers additional evidence that the author of John's gospel had first-hand knowledge of the city of Jerusalem, just as the discovery of the pool of Bethsaida (the setting of the healing in John 5) was found with its five porticoes, just as John described them. Since the 5th century, Christians had thought Siloam was the outlet of Hezekiah's tunnel, but this discovery shows a much larger, grander pool, according to the Biblical Archaeological Society.1 As Charlesworth stated in a Los Angeles Times interview which was cited by Charisma News, "Scholars have said that there wasn't a Pool of Siloam and that John was using a religious conceit… Now we have found the Pool of Siloam ... exactly where John said it was."2

Both Metaxas in his commentary and Charlesworth are correct to say the discovery lends credence to the level of historical reliability the Gospel of John holds. But that is a completely different claim than the one leading the Charisma News article. Both the article and the headline trumpeted "Archaeological evidence now proves the Gospel of John is true." Proves? It proves the truth of the entire Gospel? That's a troubling oversimplification that is actually dangerous to the message of the Gospel, as we can see by looking at a parallel story in the Los Angeles Times.


Are You Willing to Believe in Greek Gods?

The well-developed pantheon of gods in Greek mythology is familiar to most people. Much of that familiarity comes from the required reading of Homer's epic The Illiad. It is Homer's tale that provides the narrative of Helen of Troy ("the face that launched a thousand ships"), Achilles and his heel, the Trojan War and the accompanying Trojan horse. We read how the Greek gods work for or against the story's heroes and for or against each other.

Of course, Troy and Sparta are real places, but many scholars also held the Trojan War references in The Iliad were just as mythical as the references of the Greek gods. Troy was considered at first to be "entirely mythical."3 But in 1993, the Los Angeles Times reported "Archeologists have uncovered strong evidence that the Trojan War described by the poet Homer in 'The Iliad,' one of the first and most important books in Western literature, actually occurred."4

The article then reports the archaeological advancements at Troy:


In the 1870s, German merchant Heinrich Schliemann identified what he believed to be its site, a large mound on the Anatolian Peninsula about 15 miles from the modern city of Canakkale. The mound, about 600 feet long, 450 feet wide and more than 100 feet tall, is called Hisarlik (Place of Fortresses) and is accepted as the site of Troy…

In the 1990s, when excavations resumed after a fifty year hiatus, archaeologist can now show the Trojan War was not merely possible, but maybe even probable.

Given this, does archaeology prove Homer's Iliad is true? Would any Christian claim such? Of course not. It shows Homer was familiar with the area of Troy. In fact, the article quotes archaeologist Korfmann postulating "Homer might have written down his story while viewing this ruins of this city. The ruins available in this landscape could have been the stage for an epic."6

Similarly, the archaeological evidence for the Siloam Pool demonstrates it is implausible to believe the Gospel of John was wholly invented in Asia well after the fall of Jerusalem by someone who has never visited the city. It adds credence to the claim that John was an eyewitness to Jesus' miracles at the Pool of Siloam or Bethsaida. But one cannot claim it proves the Gospel of John. Otherwise, a well-informed atheist can simply ask why you don't also believe in Achilles, and the Greek gods, since archaeology has proven the Iliad in exactly the same manner.