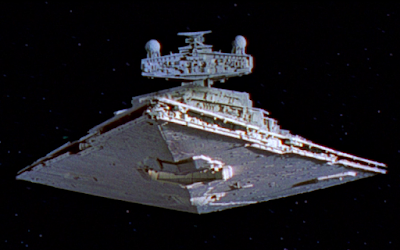 As the culture shifts and Christianity becomes less understood, it is becoming more and more difficult for Christians to share their faith.  That's why I'm so excited about being a part of Sean McDowell's latest book A New Kind of Apologist. With twenty-seven short, easy to read chapters by noted Christian thinkers tackling the most prevalent issues believers are questioned on today, it will be a tremendous resource for the church.

Below, I've provided an excerpt from my chapter entitled "Using Hollywood Blockbusters to Share Your Faith." I hope it will whet your appetite enough so you can check out the rest of the book.


I'll never forget the first time I saw Star Wars. I was young enough to see it on the big screen and lucky enough to have no expectations. The theater darkened and John Williams' majestic theme burst forth. Then, a rebel ship appeared with lasers blazing, fleeing for its life. It was quickly followed by the ominous Imperial Star Destroyer that didn't simply fly into the frame; it consumed the screen! This ship never ended! The experience still resonates with me today.

Star Wars didn't impact one generation. It continues to influence culture even decades later. Films have that kind of power. They are the modern equivalent to the traveler who visits the local village and weaves a tale of exotic places and heroic exploits. We get a new perspective on the world and we become the heroes we see on the screen. Movies whisk us away from our problems and our dreary lives. The storyteller has always had this power, but now the power is enhanced by computer-generated graphics and multi-million dollar budgets.

Movies will influence people in ways they never even realize. Take The Sideways Effect. The 2004 film centered on two friends touring California's wine country, where the main character gives an eloquent speech about his preference for one type of wine, Pinot Noir, and his disdain for Merlot. In the year following its release, sales of Pinot Noir jumped 16% while Merlot sales shrank 2%. The wine industry dubbed this "The 'Sideways' Effect."1 This is how effective powerful storytelling is in transmitting new ideas.

Jesus knew the power of story. He continually used storytelling to more easily communicate difficult concepts, both to his disciples and to his challengers. Jesus relied on parables so much that "He did not speak to them without a parable" (Mark 4:34, ESV). Jesus's parables would use the familiar experiences of that culture then draw a spiritual lesson from them. Like Jesus, we need to use examples to help us illustrate our points. Our apologetic can be more effective by drawing on the shared experience of popular films to share spiritual truth.

Movies are not only shared across our culture, they're highly relatable and they can present clear pictures of complex ideas. Movies have the added benefit of being enjoyable to watch. While your non-believing friends or family may balk at the idea of attending a Bible study, most wouldn't mind watching the latest blockbuster. And with any good film, people get excited to talk about it afterwards. That gives you the advantage. Using movies in your apologetic offers you a non-threatening way to witness to friends or family using a powerful medium with relatable examples that they'll remember for a long time. Here are just three examples of how you can use Hollywood blockbusters in your apologetic.2