History is a Problem for Those Who Doubt Jesus Was Real 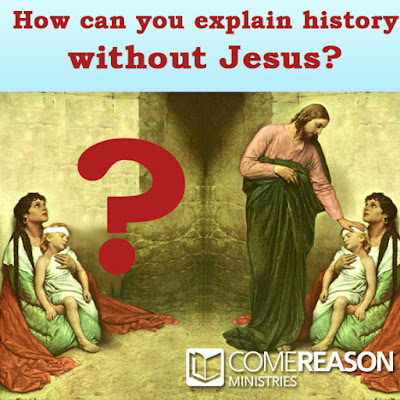 There are plenty of people who deny the existence of God or the resurrection of Jesus. They may hold that there was a sage teacher of morality named Jesus who lived in the first century who was eventually executed by the Romans. Usually, the story goes that his followers taught others about his exploits, embellishing them with legendary acts and miraculous flourishes until we have the accounts of his life we read in the Bible today. These claims have been with us for centuries.

However, today there seems to be a growing subset of people who hold that not only did Jesus of Nazareth not do the miraculous deeds recorded in the Gospel accounts, but he never existed at all. The entire account of Jesus of Nazareth is mythical; it's an invention of people looking for a messiah-figure. These "Jesus-Mythicists" have gained traction primarily because of their presence on Internet. Even hyper-skeptic Bart Ehrman has noted that no New Testament scholar or historian, including the most skeptical, would hold such a view.1


The Problem of Association

One big reason the Jesus-myth scenario is rejected by scholars is the incredible hole it creates in explaining history. How could the story of Jesus gain traction so quickly if he didn't exist? Thomas Cooper, in his book The Bridge of History over the Gulf of Time, explains the problem well:


Who can ponder on Paul's history without feeling that it must be regarded as part of the evidence for the truth of Christianity? Paul's existence and course of life, and the writing of his letters to the Christian Churches are held to be facts by all the German and French schools of skepticism; and that "Reverend" Robert Taylor that I mentioned to you who some fifty years ago was a favourite of the London freethinkers holds by the same facts But what a puzzling contradiction it seems for men to acknowledge the reality of the life and recorded acts of Paul as facts and yet to deny the truth of Christianity.

What! Paul a real man and Christ a myth? Paul a real existence; Paul, who wrote so much about Christ so soon after his death and resurrection; Paul a real existing man, and Christ's existence a fable? Paul, who held the clothes of Stephen, the first Christian martyr, while they stoned him to death? Then Stephen was also a real existing man, who died praying "Lord Jesus! receive my spirit!" Paul, the glorious half-missionary, half-mechanic, who crossed the Mediterranean and the Adriatic, and visited so many shores preaching Christ, and yet there never was any Christ to preach? Paul, a real living man, who had seen and conversed with Peter, and James, and John? Then they were all real living men. How came they to say what they did about Christ if He never existed? How came they to speak of His miracles to the people who must have seen Christ's wondrous acts, if ever He performed them? Must they not have expected the people to say, "You are impostors! no such miracles were ever performed!" Yet no one said this. Even the worst enemies of Christ did not deny His miracles, though they attributed them to Satanic agency.2

This problem of explaining events such as the conversion of Paul and his self-identification as one who martyred Christians immediately after the crucifixion of Jesus, the quick dissemination of Christianity by Jesus's original followers throughout the Roman Empire, along with the appeal over and over again to eyewitnesses becomes hopelessly strained and convoluted if Jesus wasn't a real, living person. All attempts to reconcile a real Paul with a mythical Jesus hold less explanatory scope, less explanatory power, and rely on ad-hoc assumptions when attempting to make any sense at all. Cooper saw this when writing in 1871!

If Paul was real, then his life and his conversion need to be explained. The most cogent way to do that is by believing what he himself testified: he had seen the Risen Christ (1 Cor. 15:8).

I want to offer a special thanks to Dr. Timothy McGrew for collecting Thomas Cooper's book and others at his site HistoricalApologetics.org. All the titles are in the public domain and free to everyone.