Last year, atheists Le Bayer and John Figdor ran a contest that asked atheists to rethink the Ten Commandments and suggest their own precepts that they believe people should follow. The contest offered $10,000 divided between the ten winners for the "crowdsourced Rethink of the Ten Commandments."1

I think the idea that Le Bayer and Figdor came up with was a genius one in the fact that it aptly promoted their book, Atheist Mind, Humanist Heart. 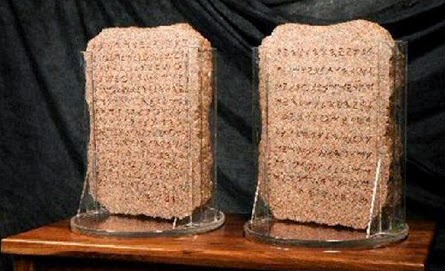 Crowdsourcing the Ten Commandments doesn't strike me as the most appropriate way to discern moral precepts. All one has to do is look at the horrendous issues with the crowdsourced Wikipedia to see that having a huge amount of contributors doesn't guarantee the truth will be produced. Wikipedia suffers from bias in many of its historically and politically focused articles. Also, edit wars, where different people with specific agendas will change or undo another's edit of an article to advance their own agendas are a continuing problem around the world.2 Yet, even here Wikipedia has an advantage as it is supposed to be focusing on factual data while ethical precepts fall into the category of prescriptions for human actions, whether we like them or wish to follow them.

There are a few things that strike me about the ten beliefs that AddictingInfo calls "non-commandments."3 One that jumps out clearly, though, is that they seem to contradict one another. For example, the first two beliefs (you can read the entire list here) are "#1 - Be open minded and be willing to alter your beliefs with new evidence" and "#2 -Strive to understand what is most likely to be true, not to believe what you wish to be true." So far, so good. I don't have any problem with either of those. However, the next commandment reads, "#3 - The scientific method is the most reliable way of understanding the natural world" and offers the explanation that "Every time humans have questions this method is used to solve them. If we don't know, we don't know but instead of making up the answer we use this method to reach a conclusion/answer." Well, this claim is demonstrably false. As I've written on before, science cannot answer questions of a moral nature. For example, science can never answer "should we clone a human being."

Science also falls short on answering questions like "Why does the natural world exist at all?" How do we get a something out of a nothing? While folks like Stephen Hawking and Lawrence Krauss try to redefine the concept of nothing so they can escape the implication of God, their efforts fall flat. The universe itself—traditionally referred to as the cosmos—needs explaining, just as one cannot look at the liquid inside a bucket and hope to explain how the bucket itself came to be. The bucket must precede its content or the liquid cannot be contained. Similarly, the explanation for the natural order of the universe cannot be found appealing to natural laws or processes. Those are the very things needing an explanation.

Because this third belief holds very specific assumptions about the world and what's real, it is actually violating the previous two precepts. Would anyone who holds to this belief be willing to alter his or her view with new evidence? Given the problems with relying on science to explain the natural world as a whole, will those who cling to this third precept be open minded enough that they would jettison it, even if it contradicts their desired belief?

Another inherent contradiction can be found in the last statements. Three of them propose moral standards by which all people should adhere:
While the last two seem a bit redundant, all of these appeal to an idea of obligation to someone other than yourself. There is a set standard that one must live by, and that is to put another person before yourself. First of all, how did the person discover this? Was it via science? Did they boil something in a flask for a certain amount of time and make measurements against a control group? If these precepts weren't discovered via the scientific method, is there another reliable way to discover real truths about our natural world?

Secondly, there's one belief that lands smack dab in the middle of these platitudes: "#9 - There is no one right way to live." Well, commandments numbered 7, 8, and 10 seem to argue differently. In fact, publishing this list at all argues for a certain perspective, as does the book that Le Bayer and Figdor are hoping to sell. I can't see how one who holds to this belief can assent to any of the others as in any way binding. In fact, if you are to take this statement as something everyone should believe to be true, which is exactly the way the list is intended, then one should ask "why should I believe this?" What if my way of living is to reject the idea that there is no one right way to live? What now?

While the idea of crafting a new Ten Commandments seems intriguing, one can quickly see that without anchoring the authority of commandments on a transcendent God, they become void of any real meaning or force. The conclusion is obvious, but I wonder if atheists are willing to be open minded enough to accept it.