Why is Thanksgiving an "Accepted" Religious Holiday?

Thanksgiving is a fascinating holiday in the U.S. The overt Christian underpinnings of the celebration cannot be denied (the Pilgrims, were Christians, right?), yet I don't see any complaints of "shoving religion down one's throat" or the worries about offending someone by wishing them a Happy Thanksgiving. Macy's holds its annual Thanksgiving Day parade to the enjoyment of thousands and even Google has a Thanksgiving doodle today, where they seem to be adamant about ignoring Easter. 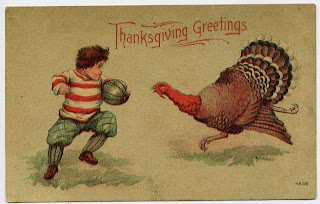 So why is Thanksgiving considered a "safe" holiday? As I've written before:


"In the very concept of thanksgiving, there's a tacit recognition of giver and receiver. In other words, if you are thankful for your present advantages, you must be thankful to someone. It makes no sense to say that you are thankful, but that thanks is attributed to the laws of nature. Imagine being thankful to gravity for holding you to the earth.  Similarly, it makes no sense to be thankful to luck, for luck is simply a word we use to talk about an arbitrary outcome.  There's no motivation behind luck; it is by definition purposeless and blind. To be thankful for purposelessness is silly."

Don't think the above statement is me stamping my foot and saying "If you're not going to acknowledge God, you can't celebrate Thanksgiving!" On the contrary, I'm glad that Thanksgiving has as far a reach as it does! I'm happy to know that the American culture still embraces this important holiday. Sure, from a consistency point of view I think that when many people express some kind of general thanks today they are fudging a bit on what they are saying, but I am very happy that they do say it at all.

You see, I think the far-reaching acceptance of Thanksgiving acknowledges our inherent understanding that we are not the most important thing in this world—that there is something bigger than us and that on our own we really are small creatures on a speck of dust floating through a vast universe. There is in each one of us at least a tacit recognition of God, even if it is as amorphous as "being thankful." Such recognition is important. By expressing an attitude of thanks it "demonstrates that God's law was written in their hearts"(Romans 2:15)and that He can still reach people.

Being thankful at Thanksgiving means that one is not out of reach of God's salvation, that one is still able to recognize his or her need for Him, even if it isn't identified as such. And for that God, who would build into us such a precious gift even when we didn't believe, I am truly thankful.
Posted by Lenny Esposito at 10:34 AM
Labels: beliefs, Christianity, culture, diversity, holidays, Thanksgiving, United States