Don't Avoid the JWs, or You May Lose a Christian! 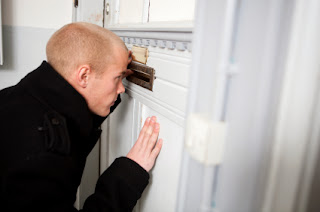 Two Jehovah's Witnessed came to my door yesterday. We talked for some time and during our conversation I asked the more experienced gentleman, whose name was Albert, to tell me why he decided to follow the teachings of the Watchtower. This is his response:


"I was raised Baptist. However, one day when two men came up to my door, they told me a lot of things that I had never heard before. They told me the truth. For example, they told me the truth about holidays. Today is Halloween and many of the different churches will celebrate this holiday that has its roots in paganism. It was a pagan holiday, started by pagans but Christians don't seem to mind. Even Christmas.  People will say 'Oh, on Christmas we celebrate Jesus,' but Jesus wasn't born on December 25! We know that he wasn't because snow would have been on the ground in December, but the shepherds were out feeding their flocks."

During this point in the conversation, I began to wonder why holidays would be the thing to cause one to change belief systems. It sounded trivial to me. But then Albert got to the crux of the problem:


"They also talked about things like the Trinity and how the Trinity isn't right. They told me things that I'd never heard before in all my time at church. Afterwards, I was confused and called my pastor. I told him what they said and asked about the holidays and the points they brought up. He asked me, 'Are those Jehovah's Witnesses? You just need to stay away from those guys. They aren't good for you. And he hung up. It was after that that I began to learn from the Witnesses because they would tell me the truth."

This really saddened me. It wasn't the problems with the holidays that turned Albert away; it was his pastor's lack of response. Albert thought that his pastor either was trying to hide something from him or possibly that the pastor had no answer to his questions. But he didn't care about these issues that bothered Albert. He simply dismissed his meeting with the Witnesses and said, "Those guys are dangerous. Don't listen to them."

Albert's pastor should be ashamed of his counsel. Instead of protecting Albert from the wolves that cone in to devour the flock, the pastor's warning had the opposite effect and made Albert a Jehovah's Witness. That was in 1980, and Albert has spent the last forty years going door to door trying to pry others away from the faith.

I've heard several pastors tell their congregations not to engage with Jehovah's Witnesses or Mormons.  They say don't confront atheists. They don't see any benefit of arguing with a person whose mind is made up. But, as Albert's story shows, this kind of response doesn't protect people from falling away. In fact, it may actually drive them towards a heretical belief since the Mormon or JW appear to want to engage in difficult questions about the Bible and faith.

Churches today need to become more serious in tackling the hard questions that both their congregants and their critics have. If Christianity is true, tough questions shouldn't scare us. Given the complexity of humanity and the transcendence of God, it also shouldn't surprise us that there will be some difficult issues we'll need to handle. But, we do a grave disservice to both the unbeliever and the Christian if we don't start working hard to find the best answers we can to the objections to the faith and incorporate them as part of a mature Christian life. In the Great Commission, Jesus commands his followers to "go and make disciples of all nations (Matt 28:19)." If we neglect the life of the mind, we are not fulfilling that call.
Posted by Lenny Esposito at 11:37 PM
Labels: apologetics, beliefs, cults, Jehovah's Witnesses, Mormonism, objections, witnessing