Atheism and Claims about All of Reality 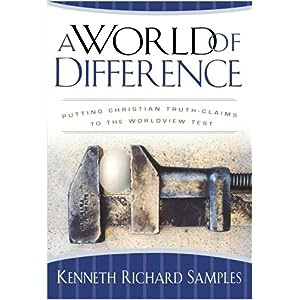 How broad is the claim of atheism? Pretty broad. Atheism is defined as a worldview that makes certain definitive claims, the most notable being that God does not exists. But in order to make such a claim, one must have an almost infinite knowledge himself. For even deists, who hold that God created the universe and then basically let it play out under its own steam are still people who do not doubt God's existence. To say that God doesn't even exist in this sense strikes me as claiming much more than one could ever prove.

In his book A World of Difference, Kenneth Samples offers this anecdote. After attending a debate on the question "Does God Exist?", Ken had the opportunity to meet and talk with the atheist supporting the negative position. Here's his recount of the exchange:

After some quibbling about the exact meaning of certain terms, the atheist essentially agreed that these two statements accurately reflected his position. I then asked, "If atheism asserts that 'no god is real' or that 'no god actually exists,' then isn't it making a universal claim about 'all reality' and 'all existence'?"

"In other words, as a point of logic,' doesn't the atheist, for his claim to be real, have to know all about reality and existence to rightly exclude any and every god. For example, to claim with any validity that there are no entities of a particular type (gods) in a given circle or set (reality), doesn't a person need a complete, comprehensive knowledge of that circle or set (reality)?’

I concluded my remarks by asserting that the atheist position could be valid only if atheists could justify their implicit claim to have a comprehensive knowledge of all reality and/or all existence. This position of seeming omniscience is, of course, beyond the capacity of any human being.

The atheist responded by saying that an incoherent god could not exist regardless of humanity's limited knowledge.

"That may well be true," I replied, "but then in order to maintain one's atheism a person must bear the burden of showing that every conceivable concept of God, is actually incoherent. This feat seems beyond the atheist's capacity."