He Needs to Be Committed: Touré's Abortion Double-Speak

Last week we marked the 40th anniversary of the infamous Roe vs. Wade decision, a particularly bad bit of legalese that opened the door to more than 55 million babies being slaughtered in the U.S. to date. There were many articles commenting on the decision, from both pro-life and pro-choice camps. One that specifically caught my attention was from the MSNBC commentator Touré (nee Touré Neblett) who said in a video commentary that abortion had "saved my life." 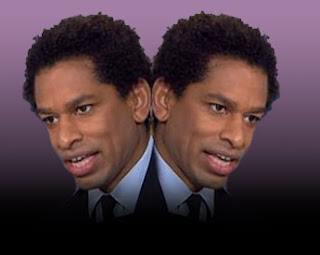 
"This week brought us the 40th anniversary of Roe v. Wade and made me reflect on a moment from about fifteen years ago when I was in a committed relationship with a woman who I knew was just not the one.  She probably also knew it wasn't gonna work out… and then she got pregnant. And I was terrified. I've always known the importance of family and building kids into strong adults. And I know I would not be who I am if not growing up under the watchful eye of two people who loved me and loved each other.  I knew that pregnant woman and I were not gonna be able to form a lasting family. She decided it was best to have an abortion and days later she did; we did. And in some ways that choice saved my life. I was not yet smart enough or man enough to build a family or raise a child and I only would have contributed to making a mess of three lives."

Touré goes on to say how years later, after he married his current wife and they were expecting their first son, his belief in abortion was shaken by viewing 3-D ultrasounds.  "But in the end I remain committed to being pro-choice because I cannot image arguing against a woman's right to control her body and thus her life." He then dismisses babies in the womb by saying that "there is a reasonable and unsolvable medical debate about when exactly life begins."

Now, there is so much terrible thinking here that I could write a book about it, but if I were to be given the chance to talk with Touré, I think I would ask him two questions.  First, notice his opening sentence. He said, "I was in a committed relationship with a woman who I knew was just not the one." Hmm. What do you mean by "the one" Touré? The context seems to imply that you didn't truly love her (remember families are built by two people who love each other), or you at least didn't love her to commit to forsake all others for her. So, if that's the case, then tell me what exactly was it that you were committed to? How can one be in a "committed relationship" without committing to the person for life?  The only answer I can come up with is that he was committed to the sex. He states that "She probably also knew it wasn't gonna work out... and then she got pregnant." So, she got pregnant after they both knew it wasn't going to work out? Touré's understanding of commitment is about as fast and loose as one could have.

Secondly, Touré said that the experience of prenatal care and the technology of ultrasounds made him question his position on abortion. His only escape from the fact that medical science through ultrasound showed that there is a live human being in the womb was to assert that "there is a reasonable and unsolvable medical debate about when exactly life begins." Perhaps the debate is unsolvable medically (the question of the soul would be a metaphysical question and thus lie outside the purview of science), but my question would be so what? There is an equally unsolvable medical debate about when exactly life ends.  However, we don't throw up our hands and claim that we can never recognize a patient from a corpse.

No, Touré is doing a brilliant job of Orwellian double-speak here.  He wants to be committed when it's not a commitment and he claims that any small area of doubt is justification to deny the facts of science that are presented to him directly so he may hold onto his politically correct ideology. It is just this type of propaganda and self-denial that allows the slaughter of the innocents to continue. If Touré was truly held to "a woman's right to control her body and thus her life", he wouldn't stand for destroying both those bodies and those lives in utero, before they ever had a chance to grow and thrive.