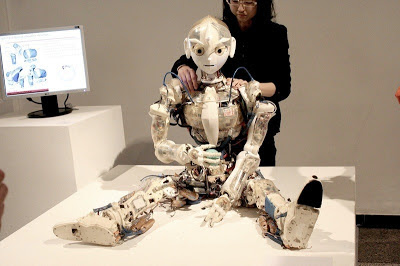 I've had an off-and-on again discussion with an atheist friend of mine on the concept of the soul. Being an atheist, he routinely defaults to a naturalistic/materialistic understanding of the world and how things work. For example, he recently made the claim on my Facebook page that "The new thing that is emerging is 'machine life' (artificial intelligence). It will surpass us in intelligence." There are two claims being made in this statement, both of which I think are faulty and the first rests on the understanding of the second.  The primary claim that machines will someday be considered alive due to advances in artificial intelligence that are happening even now. The second is that this intelligence will allow machines to be smarter than us.

The problem here is one of language. We've heard people discuss sentience or intelligence as synonyms. Then, we see a new device, such as a smart phone or intelligence-assist devices and think that people are using the words in the same fashion.  But that is simply not true.  In the first sense, intelligence means to be able to comprehend the facts that are presented to you, to understand a concept. The biggest point of understanding is not the medium through which the concept is presented nor is it the reaction or outcome.  Understanding is an act of consciousness and consciousness has a specific kind of experience associated with it that machines can never have.

You see, machines simply are cause and effect loops. Given a specific input, a computer acts like any other mechanical device—it spits out a result based on preset programming.  This is true even if the programming has a randomizer built into it.  As computer programs become more complex we can be tempted to think the machines are "understanding" what is going on, but they aren't. They are merely acting like an extremely complicated Rube Goldberg machine and producing an outcome based on their prior programming.

Philosopher John Searle's Chinese Room thought experiment is a great example of the difference. Searle asks you to imagine a man inside a locked room with two slots in the wall. A Chines messenger will slip a question written in Chinese on a piece of paper through the door and in a little while the paper will be returned through a second slot with an answer inscribed at the bottom, also in Chinese.  The messenger and probably all observers would believe the man in the room spoke Chinese.  However, inside the room the facts are different.  The man actually speaks no Chinese at all. He just has a very large code book that will tell him "If this combination of characters appears on a piece of paper, then you should write this second combination of characters at the bottom and return the paper." The man inside the room has no idea what the question is or what the answer says. It is a qualitatively different experience than conscious understanding. (For a more detailed explanation of the Chinese Room and some great animation, see this page.)

This is exactly how artificial intelligence works.  Even the head of the Google Car project can teach you how to program your own self-driving car in just seven weeks. See the page at https://www.udacity.com/course/cs373 and look at the list of topics covered in the class.  All the programming features are simply rules in a code book that must be followed by the machine.  No understanding is required. The CPU in a computer is basically a Chinese Room, except the language is binary, 1s and 0s.

I don't think the label artificial intelligence will ever change; it's become too ingrained in our culture.  However, it still can be understood that the term intelligence can mean different things. If I say my cell phone is dead, I don't mean that at one point it was capable of biological life. In the same way if I say my phone is smart, I don't mean that it is capable of conscious understanding. We would do well to note the difference.
Posted by Lenny Esposito at 11:15 AM
Labels: consciousness, life, mind, philosophy, soul, technology