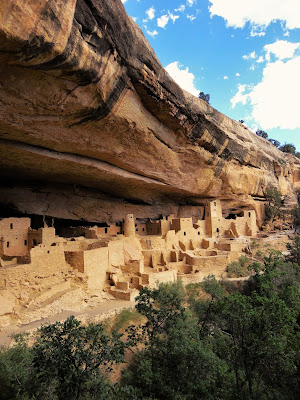 Many have asked me previously "How can you teach younger kids about apologetics and defending the faith?" Well, here's one good way. I've taken my family on a vacation touring the American Southwest. Along with a rich look at our heritage, I'm finding many opportunities to examine worldviews and the way that they shape people's attitudes. I'll be blogging about my experiences and observations as we go, allowing you to come with us and see ways you can also discuss ideas with your families and friends.

Our first day consisted of one long day of driving—750 miles! We arrived in Durango, CO knowing nothing more than it's a picturesque location and that it would be a good spot to explore. At breakfast the next morning, an ex-native of Durango recommended the Mesa Verde National Park. This area holds the ruins from the Ancient Pueblo Indians, who built their villages tucked into cliffs. I had always wanted to see these ruins and we decided that it would be a great trip.

The park is some 34 miles from the hotel, and the actual cliff dwellings that you can tour are another 20 miles of winding road beyond that. We tour Balcony House and listen to the Ranger explain how the ancient Puebloans were nomadic peoples "whose security was in their journey." The Ranger notes that the people worshiped "Father Sky" and "Mother Earth" and how their lives were seeking balance - "that center place." He also notes how the dwellings used a solar calendar to note the spring and fall equinoxes where the day and the night were equally balanced, then adds "which may have some significance for those of some other faiths." Assuming he's unfamiliar with Zoroastrianism, I assume he's referring to some form of Confucianism or Taoism. However, these were a non-literate people, so much of their beliefs and practices are nothing but sheer speculation based on interviews with their descendants who are some 800 years removed. We really don't know as much about their beliefs as some would lead on.

The most confused ideas presented during the day was in the museum where a film discussing the history of these people was playing. At the end of the film, the narrator notes that since this area is not merely an ancient place of history, "it is hallowed ground"(emphasis in the original). This shows the complete confusion today with modern understanding of the sacred. While the cliff dwellings are amazing, and these people were the ancestors of the Hopi, the Navajo, the Ute and the Mesa Indians of today, the cliff dwellings are certainly not hallowed ground. It highlights a nomadic society whose existence in this area lasted only some 80-100 years. While there's much conjecture on why they left (severe drought and lack of firewood are offered primarily) these people were still controlled by their environments. The cliff-dwellings couldn't sustain them long-term and life must've been very difficult. It's not a jump to assume that famine from loss of game and crops during the drought would cause a tremendous amount of suffering, forcing these people to continue migrating. Ultimately, building and dwelling in the cliffs didn't work to find the Puebloans' "center place" - simply because we live in a fallen world. The effects of sin were still prevalent in their daily lives and they couldn't escape it even in the rocks.

To many today, seeing 800 year old ruins of a people who lived a prehistoric lifestyle and the wonder that it inspires makes them feel like such sites are somehow holy. I think this does a disservice to the concept of what true holiness is. Holiness stems from one true God. It is seeking Him and shunning sin. While the ruins of the Puebloans are certainly awe-inspiring, they no less tell the tale of how the effects of man's fall ravages societies. They needed to better understand who God is and how He created this world. When we mix up holiness with history we are in danger of losing the real meaning of both and the lessons they teach.