Islam: Saudi Women Offer Their Breasts for a Bit of Freedom

How do we measure belief systems?  This question has been asked of me many times in one form or another, especially by those who would like to uphold a "tolerance" for all faiths, not judging any to be true or false.  However, as I've continued to say, ideas have consequences.  What you believe will determine how you approach the world and live within it. So, if a person is properly following his or her belief system (you never measure a belief system by those who violate its tenets), then you can see the outworking of that belief system and see how well it conforms to reality. 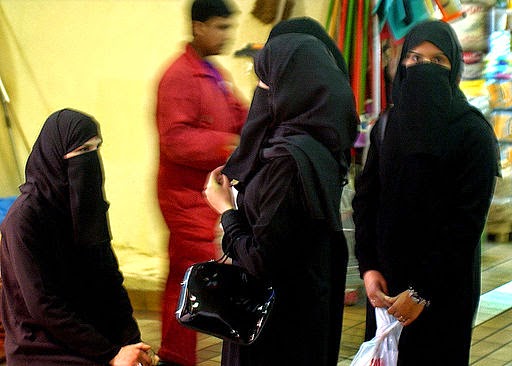 That's why a story in yesterday's Los Angeles Times caught my eye.  Entitled "Women threaten to breastfeed drivers if they aren't allowed to drive", it shows the twists and permutations where wrong-thinking ideas lead when they are extended to their logical conclusion.

Saudi Arabia is the center of the Islamic world, a very strict nation ruled by Sharia law, and like most countries under Sharia, it subjugates its women.[1]  Women must have a male guardian at all times, they're not allowed to vote, must be covered from head to toe, legally cannot drive, and the sexes must be segregated, unless the company consists of immediate family members, such as mother and son or brother and sister.  The Saudi government says these restrictions are to comply with the laws taught in Islam which is the basis of the Saudi government.  As you can imagine, it becomes pretty hard to function when women and men cannot be in the same public place at the same time.

Given that Islam is a legalistic religion (your worthiness is judged by how well you perform against the requirements placed upon you), people have sought to study the laws and find "loopholes" to see if they can circumvent some of the consequences following from the law. One of the most interesting of these was a proclamation made by Saudi cleric Abdel Mohsen Obeikan, who on May 22 said that if a woman had breastfed a man, then she and the child would have a "maternal bond" and the grown man could be found with the woman, even if he is not a blood relation.  Obeikan did not invent this idea; it is stated clearly in the Islamic Hadith that Mohammad was the one who first taught the practice.[2]  So, any man who wants to avoid a charge of "illicit mixing" of sexes merely needs to drink the woman's breast milk, thereby creating that maternal bond. [3]

Saudi women who are now seeking the right to drive have now taken Obeikan's thoughts one step further.  According to the Times article, "if they're not granted the right to drive, the women are threatening to breastfeed their drivers to establish a symbolic maternal bond. ‘Is this is all that is left to us to do: to give our breasts to the foreign drivers?' a Saudi woman named Fatima Shammary was quoted as saying by Gulf News."

Although the statement seems ridiculous on its face, it follows naturally from the law and the cleric's previous reasoning. In order to maintain modesty and purity, women would have to allow strangers to suckle them so that they can get around if a family member isn't present. They cannot mix sexes in a car, and since all women cannot drive, there are no chauffeurs or taxis that would allow them transportation.

In looking at all this, the absurdities of the law become apparent.  Granted, the legal ban on driving is a reaction to a group of protesters some 20 years ago, but the traditional view was in place long before that. The fact that in Islam women are seen as the sole problem in men's sexual temptation, thus men must be shielded from their looks and their company at every turn, is at the root of all these issues. And to think that just by passing a bodily fluid, all that temptation is somehow dissipated is as ridiculous as the former concept.

The bigger reason I point to this story is simply to show how bad belief systems not only harm real people, but they also lead the oppressed to desperation.  When oppression mix with legalism the results are tragic and the fact that Saudi women would even threaten such a move shows the poverty of the Muslim viewpoint on women.