Don't Ask a Test Tube to be a Father

This past January, the Sundance Film Festival debuted The Kids Are Alright, a movie about the tests a lesbian couple endures when their two children seek out to find their sperm-donor father. Of course, the movie's pro-homosexual message at the end is all about the difficulties every couple faces through years of commitment, echoed approvingly by an article in Psychology Today.1 But this is a movie, and just like everything else that comes out of Hollywood, the truth is a very different – and disturbing – thing. 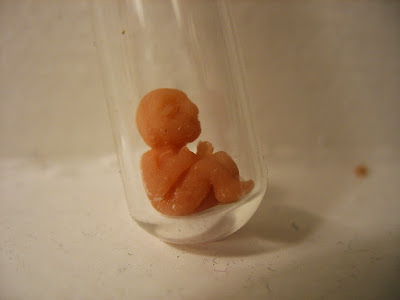 In this case, the truth comes from the definitively non-conservative online magazine Slate. In their article "The Sperm-Donor Kids Are Not Really All Right", authors Karen Clark and Elizabeth Marquardt look at how having a sperm donor father affects the emotional stability and overall well-being of a child, and the results are startling.  Here is just a brief summary of some of Clark and Marquart's findings:
Some people may be tempted to think that this is typical of any displaced child since they have unresolved questions of their biology, not knowing who one of their parents was. However Clark and Marquart also studied children who were adopted, and in comparing donor offspring to adopted children they write:


As a group, the donor offspring in our study are suffering more than those who were adopted: hurting more, feeling more confused, and feeling more isolated from their families. (And our study found that the adoptees on average are struggling more than those raised by their biological parents.) The donor offspring are more likely than the adopted to have struggled with addiction and delinquency and, similar to the adopted, a significant number have confronted depression or other mental illness. Nearly half of donor offspring, and more than half of adoptees, agree, "It is better to adopt than to use donated sperm or eggs to have a child."


In the film (disclaimer: I've not seen the movie; I've only viewed the trailer) one of the children asks his father "Why did you donate your sperm?" The man replies "It seemed a whole lot more fun at the time than donating blood." This sums up much of what is wrong with our culture’s view of creating a family. People who take a frivolous approach to having a child (or providing the materials such as sperm or ovum to create them) are not looking toward the future child’s best interest. In fact, many people seem to believe that children are just one more accessory they are entitled to, so that their list of stuff is complete. But as we see, such frivolous attitudes lead to real, damaging consequences. And these consequences not only affect the sperm-donor kids, but they affect the society as a whole who has to cope with, treat, or jail the negative actions they perform as a result.

God's original design for marriage is a father and a mother committed for life, bringing up their biological offspring. Even in our "enlightened" era, it looks like that formula is still the best for raising strong, well-adjusted individuals. No matter what Hollywood preaches, the truth tells the tale.

You can read the entire Slate article here.
You can see the actual study from Clark and Marquart here.