Using Ultimate Evil to Answer the Problem of Evil 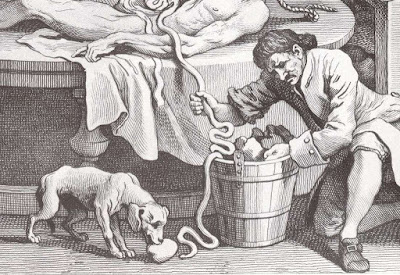 Why would an all-good, all loving God allow so much evil in the world? This question, what is known as the Problem of Evil, has been one that both believers and non-believers have wrestled with for much of Christian history. Christians have appealed to God's desire for mankind to have free will as the primary reason evil can exist at all.

Still, atheists will object to the fact that any God that would allow so much evil or certain acts that we recognize as so tremendously evil would be inconsistent with the God defined in Christianity whose primary attribute is love. Is the belief in an all-loving God incompatible with horrendously evil acts in the world? In order to better understand God's relationship to evil, I think it is helpful to look at what we can think of as the most extreme example of evil and see if the belief in the Christian God makes any sense.


What Would Count as Incredibly Evil?

Even within intentional acts there are degrees of evil. We rightly look upon murder as an evil act. As a though experiment, think of a 35 year old female victim who was murdered by a gunshot to the head. The killer is apprehended and placed on trial. If this was an indiscriminate act, such as a drive by shooting, one would rightly demand a certain level of punishment for the crime. However, if it was found that the victim was kept alive for several hours so the killer could enjoy himself torturing her, our view of the crime would change. It is more evil to torture and kill a person, especially for pleasure, than to simply kill them and walk away.

Secondly, I would argue murder is probably the most evil act one can perpetrate upon another because it robs an individual of one's most valuable asset, which is life itself. By taking a life, a perpetrator has robbed his victim of a future and the victim's friends and family of an irreplaceable asset. If one doesn't see human beings as intrinsically valuable, then the problem of evil is a functional one .Human beings are simply resources like the rest of the planet and cancer can be compared to any other natural resource. The problem of evil goes away at that point. But if human beings are intrinsically valuable, then they are different from the rest of the natural world. Their value rests in their existence. Therefore, to take away their existence is to do something uniquely evil, something more evil than any other act.


The Suffering of the Innocent Compounds Evil

Innocence is also important as we are talking about an all-knowing God. What if God allows a certain amount of evil or suffering in the life of a sinful person to show that person the ramifications of sin? It may be that an all-knowing God would use a sinful person's suffering to draw his or her attention back to himself. But if an innocent person suffered, then one can legitimately question how God could ever allow such a thing to happen.


The Most Evil Act Demonstrates an All-Loving God

I could go into more detail on my points above, but I will leave them as they stand now for brevity's sake. I lay all this out in order to develop what could be considered one of the most evil acts in history and see if we can measure how such an act could be perpetrated and still be compatible with the belief in an all-loving God. As I've noted, an intentional crime of murder against the innocent there the innocent suffer prior to death for no reason other than the enjoyment of the perpetrator is probably the most evil act one can think of. If the Christian God would stop any kind of evil, certainly he would begin with this kind of evil. This is evil with a capital "E" and certainly deserves God's attention. Does it make sense to believe in a God who allows this kind of evil to happen?

Yes it does. In fact, we have a very real historical example of just such an evil being perpetrated and we find that God not only doesn't stop it, but he allows it for very specific purposes. In the person of Jesus of Nazareth we have the epitome of the innocent individual. Christians hold that Jesus was not merely one of God's creatures but God Himself incarnate. That places his value even above those of humanity. Christianity also holds that Jesus was completely innocent and free of sin. He not only was born innocent as a baby, but he accomplished what no other human being on earth could, he remained sin-free even as an adult.

However, God allowed the most innocent and most valuable person to even walk the earth to suffer the most hideous evil of which we can conceive. Why would God allow such hideous and blatant evil to happen? Christianity tells us it is because God wanted to reconcile all of humanity to himself. As John 3:16 says "God so loved the world that he gave his only begotten son, that if you believe on him you will have everlasting life." This means, given the free will of creatures, it is not inconsistent for an all-loving God to allow even hideous evil acts to occur. The crucifixion of Christ is the most evil act human beings could perpetrate and yet God allowed it to reconcile those very human beings back into a right relationship with him. Without that evil act, we would never have that opportunity. It is the cross that proves that God not only understands the problem of evil, but he's taken the brunt of it. He then answered it by rising again.

It isn't inconsistent that the God of Christianity allows evil to exist in this world. Rather, the cross proves God can leverage the evil of this world for his purposes, making the end result (reconciliation with God and redemption from hell) a better condition than if the evil itself never occurred.