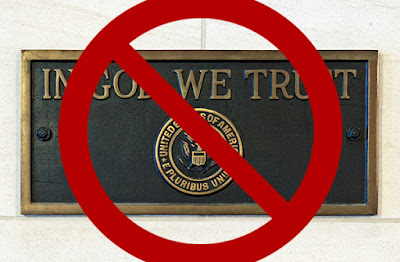 At the last Republican presidential primary debate in Iowa, atheist groups plan on holding a demonstration entitled "Keep Your Theocracy Out of Our Democracy." According to a press release by the Coalition of Reason, the event is a way of "demanding a separation of religion from government" as well as "to raise the visibility of the voice of non-theistic voters and the issues that they care about."1 ;The theme of separation of church and state plays prominently in the press release and will do so at the event as well.

The theme of; Eastern Iowa COR spokesman Rocky Gissler summed up, "An elected government official takes an oath to uphold and defend the Constitution that applies to all citizens, and their 'sincerely-held beliefs' should not supersede the supreme law of this country. When religious bias is allowed to influence our laws, it can result not only in discriminatory actions toward whole groups of people, such as the LGBTQ community, but grievous harm to individuals."

The complaint that religious belief should have no influence on governmental decision-making is a recurring one among atheist groups today. That's exactly what the title of this protest communicates. I also just wrote about how atheist Justin Scott has been quizzing the various candidates on whether they plan to cater to atheist values and telling Marco Rubio "there's talks in our community about you running as Pastor-in Chief instead of Commander-in-Chief." When engaging with Mike Huckabee, Huckabee asked Scott whether he thought the public schools should be anti-religious. Scott's reply is telling. He said, "Not anti-religious. I believe there's value in teaching religion in terms of history, in terms of literature, but not in terms of 'This is truth.'"


Secularism Makes Truth-Claims about the World

What Gissler, Scott, and others like them fail to realize is the sentiment of holding religion as an untruth is not taking a neutral position. There's a big assumption that because something may be classified as secular it is unbiased, but that simply doesn't follow. For example, Gissler's statement above takes a particular moral stance on the same-sex marriage debate. He is allowing his secularism to inform him of what legislation he deems appropriate and which legislation he deems discriminatory.

When one looks at education, we can find the same trend. To teach evolution as the dominant explanation for the diversity of life on the earth is understandable in a science class. However, by labeling evolution as "secular" and any and all competition theories as "religious," an inherent bias is set up. That's problematic, because neo-Darwinism needs to be falsifiable to be a scientifically solid explanatory theory. ;But what would the parameters of what falsification look like? Instead of blind natural processes, diversity would require some kind of purposeful creator. Atheist claim this is forbidden.

The preference of atheists to assert secularism over other types of beliefs are clear. Atheists demand that none of their tax dollars goes to anything even remotely resembling faith. Nativity scenes, crosses existing on public lands, and even food pantries for the poor have all been targeted by atheist groups who hate any association of tax dollars with even the hint of a theistic belief system. But what about Christians who are supposed to support secular programs in schools to the exclusion of their beliefs? Why should only those who make the claim "God does not exist" get the free ride? That's what the protesters are really demanding; they want their beliefs to be the only ones in government. But our government is founded upon the belief that it is God who gives us certain rights . Take God away and all those rights the atheists are demanding fold like a house of cards.

It's easy to try and play off secularism as a neutral position, but secularism isn't neutral. It stands opposed to most religious belief systems. If our country is truly going to be a free one, then its citizens must be able to draw upon their first freedom of the free exercise of religion. We must be able to exercise that freedom in our workplaces, in our schools, and in the voting booth. And those whom we elect should be able to exercise their beliefs and draw upon those beliefs to inform their views while in office. Anything less is demanding as oppressive a government as the one our Founders fled.