Not many people think about Jesus and his intellect, but Jesus was the smartest man who ever lived. He wasnt a philosopher, but he could argue logically and philosophically when the need arose. For example, in one passage of scripture, the Pharisees were trying to trap Jesus by asking him if the faithful Jews should pay taxes to Caesar or if they should rather choose to love God. Jesus unraveled their trap by pointing out the logical fallacy hidden in their question. 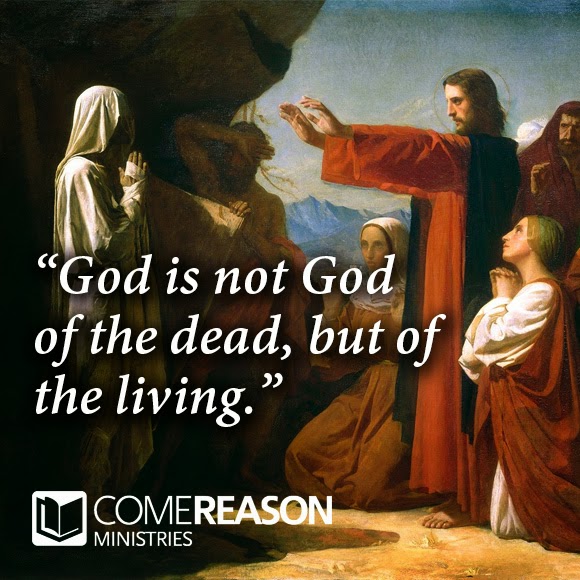 The Pharisees weren't the only ones, though, that tried to trap Jesus. The Sadducees, who were another group within first century Judaism and the sect that had the primary control over the Temple in Jerusalem, also tried to catch Jesus by asking him a question. In Mark 12:19:27, they offer a thought experiment, one that was designed to prove their belief that once people die, they cease to exist.1 They asked Jesus to imagine a man who has six brothers. He married a woman, but then died, leaving the wife childless. They then said that the mans brother took the woman for his wife, but he also died, and so did all the brothers, each after taking the woman as his own wife. (One must wonder what kind of a scary cook such a woman would be!) Finally the woman dies. The Sadducees then inquire "In the resurrection, when they rise again, whose wife will she be? For the seven had her as wife. (Mark 12:23)"


Trying To Leverage the Reductio

In this example, the Sadducees are using as tactic from logic known as arguing from absurdity or the more formal Latin title of reductio ad absurdum. Basically, the tactic is to take whatever proposition one is arguing against and follow it even in an extreme situation to see if the proposition still makes sense.  Parents are famous for this tactic. After asking to stay home alone because your friend Johnny is allowed, you may have heard them respond, "If Johnny jumped off a bridge, would you do it, too?"

Reducing an argument to absurdity is in itself not a fallacy; in fact it can be very effective in clarifying the points of someones position. I've used it myself in arguing against abortion.  But, the problem with this attempt is the Sadducees were committing another fallacy in their argument. They assumed that because people experience marriage in one way on this earth, that experience will continue to be true in heaven. This is known as the fallacy of composition or the part-to-whole fallacy. Simply because a man and a woman are properly joined in the covenant of marriage on this earth, doesnt mean that that bond will extend beyond the grave. Jesus makes this clear when he corrects them, saying "Is this not the reason you are wrong, because you know neither the Scriptures nor the power of God? For when they rise from the dead, they neither marry nor are given in marriage, but are like angels in heaven" (Mark 12:24-25, ESV).


The Fallacy of Composition

Jesus makes it clear that marriage is as we say ion our vows today: until death do us part. The Sadducees assumed that such a union made no sense with the wife and the seven brothers in heaven, and they tried to use this argument to dismiss the idea of an afterlife at all. But all our relationships will be different in eternity.

Not only did Jesus point out this problem with the Sadducees argument, but he also turned the argument around on them! The Sadducees were very strict in the way they read the Torah and they would not accept the traditions and teachings of many Jewish scholars who came before them.2But, because the Torah played such a high view in the theology of the Sadducees, Jesus chooses to quote from one of its defining verses, Exodus 3:6 where God declares himself to Moses. Jesus answered them, "And as for the dead being raised, have you not read in the book of Moses, in the passage about the bush, how God spoke to him, saying, ‘I am the God of Abraham, and the God of Isaac, and the God of Jacob?  He is not God of the dead, but of the living. You are quite wrong" (Mark 12:26-27, ESV).

Jesus emphasized the fact that the verb used is "am" not "was," thus proving that Abraham, Isaac, and Jacob were all conscious souls who still relate to God. Given the Sadducees strict adherence to the written Torah, they had no way to answer this, for to deny that scripture would make their entire belief system crumble. It was a master stroke that demonstrated again just how knowledgeable Jesus was and how he could draw upon logic as he needed to make his point and silence his critics.