The Come Let Us Reason Together podcast has continued to grow in 2014, seeing an average of nearly 1,700 downloads a month as we approach the end of the year. Part of Some of the increasing popularity has come from people interested in listening to previous podcasts, a task that was made much easier since we have redesigned the podcast page and integrated it into the comereason.org site. 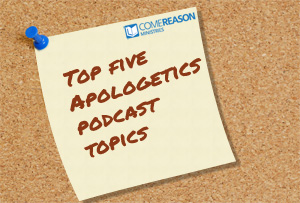 Of the popular topics for 2014, two of them ("Tools for the God-Fearing Mind" and "Science, God, and Knowing") deal with some complicated issues. Yet, these made it into our top five. Some others deal with questions that you hear from skeptics and the top podcast topic is one we've approached before: how to understand and witness to Muslims.

Here, in reverse order of popularity, are the top five podcast topics of 2014.