There is a lot of sloppy thinking in our modern world, especially when it comes to the area of faith and beliefs. While this shows up frequently in mainstream outlets (the blog over at GetReligion has covered the myopia of the press for years), social media is one of the main enablers of quick quips that sound good but really make no sense at all. The internet meme is a prime example of this.


I've been deconstructing memes every once in a while on the blog; you can find some of my previous posts here.  Yesterday, though, I had the first opportunity to interact with the creator of one of these slick picture-slogans. Atheist Michael Sherlock claims "Christianity did not become a major religion by the quality of its truth, but by the quantity of its violence." After I had pointed out the fact that early Christianity didn't spread by doing violence, but were the victims of various martyrdoms, Sherlock sought to argue that the early church leaders would solicit Christians to become martyrs for the PR value and attract more adherents. Yesterday I showed why his claims and sources fail.

However, there's another problem with the argument. It simply isn't true that since Christians were the recipients of violent acts, it somehow justifies his meme. If one looks carefully at what Sherlock's meme states, the reasons become apparent.

First off, it would be a mistake to assume that ancient Roman culture would look upon those who are conscientiously objecting to state requirements in the same way that we may in the 21st century. One source Sherlock cites is a footnote of Anthony Briley that supposedly shows Christians are trained to be martyrs. Briley comments that "Marcus thinks of Christians as 'lined up unarmed' for death, as soldiers in battle array: but not as persons who had really made an individual reasoned choice — they were drilled, and trained to die…" I think Sherlock misunderstands this passage. Briley wasn't saying that Christian were training to die. Rather, he was using this as one of many examples of how Aurelius would see Christians in a negative light.

It strikes me this is actually evidence against Sherlock's charge. The Romans were a militaristic people and valued not dying for one's own cause, but killing on behalf of the state. Alvin J. Schmidt quotes Richard Frothingham stating "The individual was regarded as of value only if he was part of the political fabric and able to contribute to its uses, as though it were the end of his being to aggrandize the State."1. Roman virtues of frugalitas, severitas, and fidelis that Roman soldiers were expected to exhibit were considered virtuous, not the giving of oneself to death. A man who is martyred for crimes against Rome would be about as attractive to Romans as suicide bombers are to Americans today. You may get a few fringe followers, but it would in no way explain drastic growth in the same way that Christian charity and missionary efforts do.


The Problem with Blaming Christians for Being Martyrs

What Sherlock has attempted to do is to justify his meme after the fact by claiming that performing violence on Christians is the same thing as Christian violence. Note what the meme states: "Christianity did not become a major religion by the quality of its truth, but by the quantity of its violence." Anyone who reads that will understand it to say that Christianity grew to a world religion through violent conquest as its primary proselytizing method. The phrase "quantity of its violence" can be parsed clearly. Sherlock uses a possessive pronoun to state that it is Christian-generated violence that expanded the faith. Then, when called out on the mistake, he makes says the violence of martyrdom justifies his meme. He writes, "Thus, in the ante-Nicene period, prior to its transformation into a dangerous and murderous religion, Christianity was but a violent suicide cult, the aim of which was to spread by way of violent theatrics aimed at inspiring onlookers with the needless spilling of the blood of innocent fools."2

To claim that Christian martyrs died as a PR stunt is despicable . Briley, in the same footnote that's mentioned above, talks about the charges of incest and cannibalism that would also arise against Christians, false charges that Roman apologists such as Minucius Felix or Lollianus would use to stir the populous against them. 3 The fact that the Romans felt they needed to fabricate false charges puts Sherlock's claim in doubt. Historian Robert L. Wliken tells us that charges of incest and cannibalism "had become widespread" against Christians by the late second century and comments that in the Roman world "charges of immorality and licentiousness were often brought against devious individuals or groups."4 Wilken then notes how the charges became standardized, following a very specific pattern which underscores their dubious nature.5

So how does Sherlock come to the conclusion that Christian leaders would encourage "many of their followers to provoke the Roman authorities?" If so many Christians were seeking to provoke the powers that be, why would a society that values law and order need to invent anything at all? The fact is that no reputable scholar of the anti-Nicean period would ever take Sherlock's interpretation seriously. He's gasping at trying to make Christianity into something it isn't. Sherlock is using the same tact that Felix and Lollianus did, only the evidence falls against him.

The early martyrdom suffered by the saints cannot be considered Christian violence, but only violence done to Christians. Even today, Christians are the most persecuted people in the world because of their faith. Reports out of Nairobi and other nations about gunmen hunting down Christians in shopping malls are horrifying. Does Sherlock label this "Christian violence?" Does he think that the dozens who died simply because they were attending  All Saints' Church staged it for the PR value? Such claims would rightfully be considered disgusting and offensive. Just because the early martyrs preceded these by some 1700 years doesn't make Sherlock's claims any less so.

Internet memes can be very attractive if one doesn't think to carefully. It's easy to try and reduce centuries of history to a few words. But history isn't so reducible. Neither is dismissing the deaths of others because you don't like their faith. 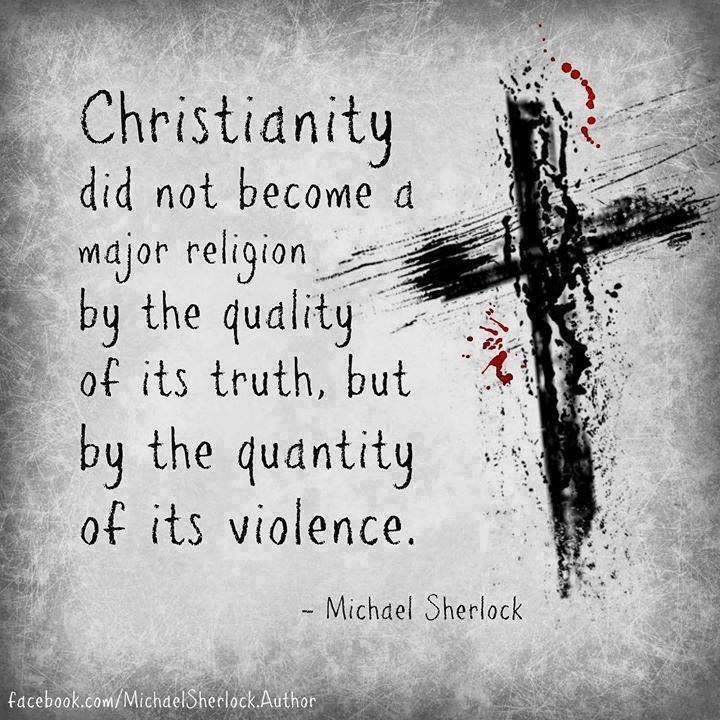