Do Religious Candidates Pose a Threat for Atheist Voters? 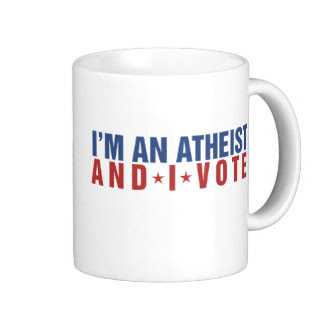 It's an election year in the United States and presidential candidates have been stumping for votes across the country. Most have been holding various town hall meetings where they could meet with voters and answer their questions or concerns. Interestingly, one YouTube vlogger named Justin Scott has been attending some of the meetings as a representative of the atheist community. Here's how Scott approached Republican candidate Marco Rubio with his question:


I'm an atheist voter. I represent millions of atheists and non-theists around the country, one of the fastest growing voter blocs and you said earlier that you want to stand up for religious freedom and all of that. My question is for atheist voters that are looking for somebody that will uphold their rights as Americans and not pander to a certain religious group.

My question is how do you plan on upholding our rights and focusing on non-theists. You know, there's, there's talks in our community about you running as Pastor-in Chief instead of Commander-in-Chief, so I'm curious your thoughts.

Notice the core of Scott's question. He states atheist voters are looking for a candidate to "uphold their rights as Americans and not pander to a certain religious group." He then asks Rubio "how do you plan on upholding our rights and focusing on non-theists."

Scott's line of questioning is strange. Must the president of the United States focus on non-theists in order to uphold their rights? If that's true, then he must also focus on every group of every religious persuasion, a daunting process in a widely diverse country of 330 million people. Scott also includes a couple of ad hominems in his question, using the label "pastor-in-chief" and implying Rubio may be pandering to a certain religious group.

Notice, there are no specifics tied to his concerns. He doesn't point to any legislation Rubio sponsored that violates the First Amendment rights of non-believers. He offers no specific instances where Rubio personally showed animus towards non-believers and Rubio does a great job of answering Scott by pointing to the First Amendment. (You can watch the entire exchange here.)


I'm an atheist, and I feel as if the Republican Party lately is hell-bent on tearing down separation of church and state. I want to know your thoughts on that. I also want to know why should I vote for you. Why should millions of atheists around the country support a candidate that has made comments like you've made about us?

At this point, Huckabee asks Scott "What have I made about you?" Scott again dodges any specific charges, simply offering a generalized caricature of the comments as "they haven't been pretty." Huckabee answers he would in fact uphold the First Amendment and how if guarantees Scott and any other non-believers "to be atheists as much as it guarantees me the right to be a Christian, or somebody else the right to be a Jew or Muslim or Hindu, or Buddhist." Huckabee is right here. The separation clause of the First Amendment simply says the Federal Government cannot compel any religious belief or non-belief upon its citizenry.

One point Scott seems to miss here is being a passionate believer about one's particular faith is not a disqualifier for office, even the office of president. If one holds to Christianity, that doesn't simply mean the person attends Sunday church. It means the Christian worldview will shape his or her understanding of all reality. That's protected by the very First Amendment that also protects Scott's view of reality.

Because Scott can't seem to offer specifics of where the candidates demonstrate a predilection to abridge the rights of non-believers and cannot even name exactly which rights he means, his question strikes me as pandering. He's unjustifiably biasing a candidate solely on their religious views. Thus, Scott really fails to add any substance to the discussion on the candidates and how non-believers will fare under their leadership.

Tomorrow, I will explore a bit more of Scott's comments and specifically his concern with religion in schools. But for now, the lack of detail should be more troubling for those who are cheering Scott on than for any of the candidates.
Posted by Lenny Esposito at 11:56 AM No comments:
Labels: atheism, elections, freedom of religion, government

Should a Christian Vote for the Lesser of Two Evils?

I've been hearing from a lot of Christians that they will either choose to sit out this election or not vote for president because neither choice is a candidate they consider appropriate for the position. They believe that their consciences would be violated by voting for "the lesser of two evils." Some hold that because neither are conservative Christians they therefore shouldn't be considered. Some wish to vote for the Libertarian candidate because they believe in Libertarian ideals. Some people are promoting the idea that Christians write in "Jesus" as their choice for president! (I would hope that any Christian with half a mind would never choose that last option, as it is infantile and foolish.  God is not pleased with such actions.)

On the other points, I can understand some people's misgivings. But I think we need to better understand just what is happening during a presidential election and why voting is crucially important and possibly even commanded by God for all faithful Christians.

First, I think that the idea of the "lesser of two evils" has no merit. I actually think it doesn't apply in the U.S. political process.  Our entire political system is not structured to find a single position on all issues.  It by nature takes into account those who differ, as they are represented and their disagreements should be included and weighed in the discussion.

The point of American politics is much like football; it is a game of inches.  One strives towards his goal line, but understands that forward progress is better than backward progress.  That's why I currently oppose promoting legislation that bans all abortions.  I am personally against elective abortion in any form except when the life of the mother is in jeopardy.  However, to seek to advance legislation at this point would actually set the pro-life movement back and more babies would be lost as a result. The goal isn't the laws; it’s the lives of the children at stake.  This is why compromise is a key part of congress passing laws, something I think both sides of the aisle have forgotten.  Ideology is great; it gives you a goal to focus on. But any team that is only throwing to the end zone will soon have their game figured out and be quickly defeated.

Choosing a president, a senator, or any elected official plays out the same way.  The office of president is especially powerful in this aspect.  Either Barack Obama or Mitt Romney will lead our nation for the next four years, there's no escaping that.  Gary Johnson and other candidates may have been seen as more palatable, but they simply won't win. So, I would urge you to vote for the candidate that you deem more closely aligned to your goals and beliefs as a Christian. We choose presidents, not kings, and we are able to re-choose every four years for the express purpose that no one man will ever be the candidate that is perfect.

Lastly, I would note that in Romans 13 God tells us that the governing authorities are provided the sword by God to do good. We tend to read that verse and think of the president or the government writ large as that governing authority.  However, in our nation it is we the people that are the ultimate seat of authority.  We decide who is president and who sits in congress.  That means that God has given us the sword—the sword of the vote—to wield for the good. As a believer I think we would be remiss in our duties if we were to keep it in its sheath because we disliked both candidates.  On some issues Romney and Obama are close.  On other issues, they are not.  There are more issues where both have sought to reflect the views of their constituency when in the past they have held a different view.  (That last item is not a "flip-flop" or pandering as is often portrayed in the press.  I think it is appropriate as long as the candidate keeps his word and actually does what he promised after the election.) But there are enough clear differences between the two to know what they are and to be able to make a choice.

I urge you to exercise your sword, for God does not give it in vain.
Posted by Lenny Esposito at 9:18 AM 1 comment:
Labels: Christian living, Christian nation, culture, elections, politics, president, United States
Older Posts Home
View mobile version
Subscribe to: Posts (Atom)