Why a Scientific Consensus isn't What it's Cracked Up to Be 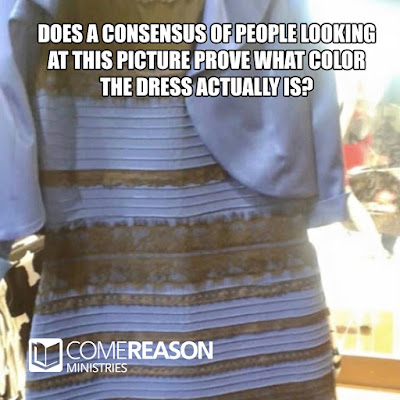 A couple of years ago, the Internet blew up over a huge debate—one that captured the attention of popular culture and caused fierce disagreements between friends and family members. I am, of course, talking about the infamous "What color is the dress?" meme portrayed in the accompanying image. One can perceive the dress colors to be either blue and black or white and gold, and it seems for most people once you see the colors a certain way, you simply can't see them from the other perspective.

Now, imagine you want to buy a gift for your mother's birthday and your father had sent you that same picture with the recommendation that since he's buying her a dress, you should purchase the accessories. Would your purchases make sense? We don't know. It all depends on what you see and whether your perception matches reality. Even if the one buying the accessories had the most exquisite fashion sense and was gifted in picking out the most tasteful and appropriate accoutrements, it matters what their perception of the dress colors were.


Scientific Consensus is Founded on Paradigms

I offer the thought experiment because it helps us to better understand how paradigms influence people. We all make choices based on a specific way of seeing things, and this is true in the fields of science as much as it is in any other discipline. In fact, the terms "paradigm" and "paradigm shift" were coined by Thomas Kuhn in his earthshaking book The Structure of Scientific Revolutions. Kuhn there demonstrates how scientific knowledge hasn't been acquired in a slow, steady, progressive line. That's a myth.

Kuhn states that what really happens is young scientists accept certain assumptions about how the world works because they've been taught that from those already in the field. He writes that the student studying in whatever scientific discipline he will eventually practice,


joins men who learned the bases of their field from the same concrete models, his subsequent practice will seldom evoke overt disagreement over fundamentals. Men whose research is based on shared paradigms are committed to the same rules and standards for scientific practice. That commitment and the apparent consensus it produces are prerequisites for normal science, i.e., for the genesis and continuation of a particular research tradition.1(emphasis added).

What this means is that scientists within a particular field of study all start with some basic assumptions and then they rely upon those assumptions to solve problems on details within that model. So, if one were to start with the paradigm that the dress is white and gold, then the answer to the problem of what kind of accessories would complement the dress will come out differently than if one were to hold the paradigm that the dress is blue and black.


The Consensus Can be Influenced by Outside Factors

If you are basing your accessory choices on the paradigm of a white and gold dress, and you find that the majority of those who you learn from and those you work with have also accepted this paradigm, you no longer ask about the color of the dress or whether whiter is a better color for a handbag than back. When someone comes into your fold and suggests black for a handbag, your reaction would be one of incredulity. Certainly any fool can see that black is the wrong color choice! You might even make fun of them and dismiss them as not doing good science. But what they've questioned is the paradigm you have assumed, not the reasoning to the color if the paradigm were true.

Here's the thing, though. These paradigms themselves are frequently caused by factors beyond dispassionate science. Kuhn himself discovered this when investigating the Ptolemaic and Copernican ideas of the solar system. Ptolemy's paradigm was first formed by Aristotle, who held to a couple of very Greek ideas, one of which was that some bodies are naturally inclined to move in a circular pattern. In other words, planets by their nature would move circularly because that's what they do. Aristotle's assumption set the paradigm that worked for many centuries and allowed the scientists for those days to come up with accurate predictions. 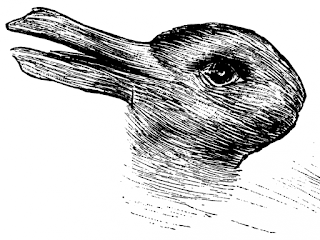 It's much like another image that takes on conflicting perceptions. Look at the drawing of the animal I have here. Is this a drawing of a rabbit or a duck? Normally, you will perceive one or the other first. Interestingly, outside factors make a difference in what you see. The Independent reports "At different times during the year, the result of the test seem to change. During the Easter period, people are more likely to see a rabbit first but in October, seeing the duck first is more common."2

Aristotle's assumption on the nature of bodies moving in a circular pattern was based on Greek philosophy. Thus it was a philosophical commitment that shaped the science of planetary orbits and of our understanding the nature of our solar system for centuries. It was only when instruments became more sophisticated that flaw could be seen in the model. These flaws grew to the point of crisis until those within the community had to abandon their paradigm and adopt a new one. This is what Kuhn labels a paradigm shift.


The Consensus Can Be Wrong

Before a paradigm shift occurs, there is a scientific consensus about whatever point one is discussing. But even though a consensus exists, that doesn't mean those who oppose the consensus are wrong. They may in fact be right, but they are simply offering a different paradigm.

When you read about the contentious scientific issues of our day like the origin of life, man-caused climate change, and neo-Darwinian evolution, it won't be long before someone makes the claim that given a scientific consensus exists on topic X, anyone who holds a contrary view is anti-science. That's simply wrong. It may be that those who hold to the contrary position see the flaws and wish to question the paradigm itself. The bigger question thinking people need to ask is "what are the assumptions implicit in this position and have they been tested?" The question of the color of the dress can be answered, if one enlarges the frame to see more of the picture. Doing this isn't anti-science but what Kun calls extraordinary science.

So let's not point to the idea of a scientific consensus as the final card in a debate. The consensus may be the very thing that needs to be questioned.

1. Thomas Samuel Kuhn, The Structure of Scientific Revolutions, Second Edition., University of Chicago Press, 1970. 11.
2. Chloe Farand. "Duck or Rabbit? The 100-Year-Old Optical Illusion That Could Tell You How Creative You Are." The Independent, Independent Digital News and Media, 14 Feb. 2016, www.independent.co.uk/news/science/duck-or-rabbit-the-100-year-old-optical-illusion-that-tells-you-how-creative-you-are-a6873106.html.