Yes Jesus Existed: Even Romans Outside the Bible Wrote About Him 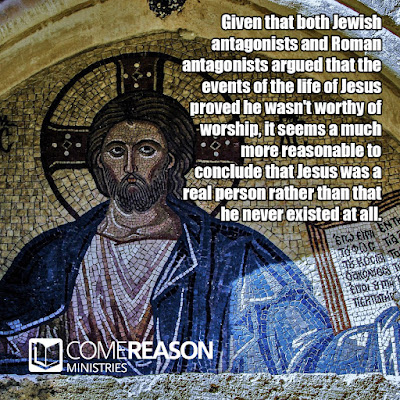 It seems that given enough of a shine, any bad idea can gain traction. For most of history, scholars have debated the events of the life of Jesus recorded in the biblical accounts. However, the vast majority of New Testament scholars, both those who are of the faith and those who are critical of it, have held that it as historical fact that a man named Jesus of Nazareth lived in first century Palestine, had disciples follow him, and was eventually put to death. While a few fringe elements doubted the idea of a historical Jesus, not even most atheist New Testament scholars believe that Jesus never existed.

But with the advent of the internet and the ability to self-publish, that fringe has grown a much larger following. Now there are very popular atheists who hold that the entire account of Jesus's life, teaching, and death, are simply made up, setting a fictional stage for a fictional tale of a mythical messiah. They claim that if Jesus was such a big deal he would surely have been noticed and written about by more than just the biblical authors.

While that argument isn't valid—in comparison to the events of the Empire in circa 30 A.D., the goings on in Palestine wouldn't be considered newsworthy to those living in Rome—the fact is that Jesus does get mentioned in ancient Roman sources. In his book Jesus Outside the New Testament, Dr. Robert E. Van Voorst pulls together citations from Roman writers such as Thalles, Pliny the Younger, Seutonius, Tacitus, Mara bar Serapion, Lucian of Samosata, and Celsus, along with Jewish sources such as Josephus and other rabbinic writings. Of his Roman sources, Van Voorst underscores that this is a pretty diverse group:


The famous Roman writers on history and imperial affairs have taken pride of place: Suetonius, Tacitus, and Pliny the Younger. On the other end of the spectrum, the comparatively unknown writers Mara and Thallos have also contributed their voices. Philosophic opponents to Christianity such as Lucian and Celsus have also written about Christ. These writers have a range of opinion: from those perhaps sympathetic to Christ (Mara); through those moderately hostile (Pliny) and those fully hostile but descriptive (Tacitus, Suetonius); to those not interested in description, but who vigorously attack Christianity and in the process attack Christ (Lucian and Celsus). A variety of languages is also notable: Latin, the official language of Rome; Greek, both a common literary language and the language of trade; and Syriac, a main language of the eastern Mediterranean. Together, they speak of a variety of topics about Jesus' teachings, movement, and death. And they know that Jesus is worshiped by Christians, which they relate to his founding of a movement.1

Van Voorst is cautious not to make too much of these mentions, as he notes most of the outside accounts of Jesus's life are coming from Christians who do believe He existed. He even states "by the strictest standards of historical evidence we cannot use them to demonstrate the existence of Jesus. On the other hand, given the nature of the evidence on Jesus from classical authors, neither can one use them as conclusive evidence to disprove the existence of Jesus."2 But these sources cannot be counted out as of no value at all. After all, some of these sources were very hostile to Christianity and they would have motive to point out the fact that such a man as Jesus was mythical. Instead, Van Voorst sees them as secondary sources of historical accounts. After making the above points, he continues:


…Although independent confirmation by contemporary classical writers is excluded, we do gain a later corroboration of certain key elements in the life of Jesus. Corroboration of knowledge is important, in historiography as in the natural sciences. If classical writers had never mentioned Jesus, or especially if they had argued that he was a product of Christian myth­making, then it would be a different matter. They did treat Jesus as a historical person, the founder of his movement, and had no reason to doubt his historicity. It would have been easy (if Jesus never existed) to deliver a strong blow against Christianity by showing that it was based on a myth when it claimed to be based on history. But these writers accepted Jesus as historical, and all but one used the events of his life as arguments against Christianity: he began a movement that they called a pernicious superstition, and he was executed as a criminal.3

Van Voorst concludes that ultimately to do good history, we must do what scholars have done for centuries. We have to take the New Testament accounts themselves as what they are, documents of ancient history. The evidence there is very strong that the New Testament authors were writing in a specific genre of ancient biography, meaning they were writing about a real person. And given that both Jewish antagonists and Roman antagonists argued that the events of the life of Jesus proved he wasn't worthy of worship, it seems a much more reasonable to conclude that Jesus was a real person rather than that he never existed at all.