Atheists Dragging God Down to Our Level 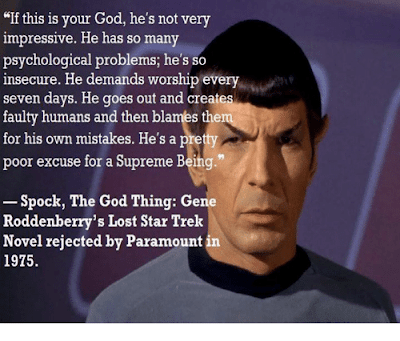 The Christian God is a God who expects worship. I don't think that point is controversial. However, many atheists have offered this fact as some kind of flaw or as an example of a contradiction within the Christian view of God. They see God as some kind of egomaniac since he demands his creation worship him.

One good example is this quote from Star Trek creator Gene Roddenberry. Roddenberry supposedly gave Paramount a script for a Star Trek treatment whereby he sought to tease out the fallibility of the traditional concept of God:


One of the Vulcans on board, in a very logical way, says, 'If this is your God, he's not very impressive. He's got so many psychological problems; he's so insecure. He demands worship every seven days. He goes out and creates faulty humans and then blames them for his own mistakes. He's a pretty poor excuse for a supreme being.1

I've sourced this story back to a 1994 book by Edward Gross, but I cannot find a hard copy to confirm the quote. Still, regardless of whether an actual script was offered, the quote has since turned into a meme promoted by atheists online as one way to show how the biblical God doesn't make sense. But does it show a God who demands worship is insecure? If so, he is hardly worthy to be worshipped as God.


Is God Insecure in Asking for Worship?

I think the objection says a lot more about the objector than it does about God. Firstly, the meme ignores the fact that God is not on the same level as man. Certainly one man demanding worship from another would demonstrate a psychological imbalance, but that's because we recognize the equality of human beings. We also recognize that all human beings are flawed. It is the fact that that other person is not God as to why we their demand for worship as wrong.

On the other hand, God holds certain unique attributes that make it sensible for humans to worship him. One of these is the fact that God is the very essence of goodness. We certainly see the value in acknowledging the good in people. That's why we name streets and celebrate a holiday in Martin Luther King's honor. We don't worship King, but parents will tell their children that it's important to uphold applaud the good that people do. The concept of good should be held in the highest regard. Thus if God is the locus of the good, then he is rightfully exalted for his nature.

Secondly as creator and provider, God should be worshipped. We see this in a smaller way within human relationships, too. Children should honor and respect their loving parents. This is appropriate and children who are defiant of parents who only have their best interests at heart are considered spoiled.

While each of us is indebted to our parents, our indebtedness to God as our creator is of a greater kind. As the author of all life, it was God who not only gave us life, but shaped us into the very individuals we are. He didn't simply stop there, either. He sustains us, blessing us with the ability to breathe moment by moment, gives us the very food we eat, and a rational mind to know Him.

The atheist who claims God is being egomaniacal or insecure by demanding worship has a woefully underdeveloped view of God. God is not simply a bigger, more powerful human. God is different in kind from us, not simply different in degree. Given that even within our own humanity, we see it as logical and right to honor someone for upholding the good and appropriate to give deference to parents and those in authority, then is certainly would be logical to worship a being from whom all goodness derives and by whom we owe every aspect of our existence. If a parent demands such respect from a child (and not demanding such is actually detrimental to the child by spoiling her), then I cannot see the supposed logic of the Vulcan's statement. In fact, it strikes me as illogical to treat a being like God as just another human creature. It's simply one more attempt to drag God down to the atheist's level.