What to Make of the New Seven Earth-Like Planets Discovered 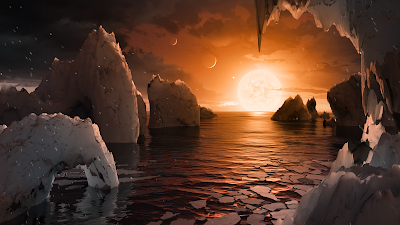 The headlines were spectacular. Time Magazine pronounced "NASA Announces a Single Star Is Home to At Least 7 Earthlike Planets."1 Vox exclaimed "NASA has discovered 7 Earth-like planets orbiting a star just 40 light-years away."2 Even the official press release from NASA offered some tantalizing tidbits, noting that all seven planets of the TRAPPIST-1 system reside in the habitable zone necessary for life and it included artists' rendering of what the view may look like from one of these newly discovered sisters of earth.3

Certainly, the discovery of planets orbiting another star is an exciting one. The fact that the TRAPPIST-1 star is relatively close in astronomical terms (40 light years away) means the system is more easily observed by our telescopes; we can gather more data on the planets themselves. To find seven of them ups the chances that we may find water on them, too. But does this mean we've uncovered a bunch of earth-twins that are just ready to be populated by living organisms? Not by a long shot.


What do you mean "Earth-like"?

Since capturing eyeballs and clicks are the driving force behind both news organizations and sites like Vox, one should be a bit cautious before jumping to conclusions by just a screaming headline. When I saw this story, I was intrigued, but upon reading the details, certain terms don't carry the weight one may assume at first.

For example, both the Vox and the Time article called these planets "Earth-like" in their headlines. That will certainly evoke a picture in the minds of most casual readers, but what does Earth-like really mean? Both articles did unpack the term to mean a planet whose size is within a certain percentage of Earth's and is not too hot or too cold for water to exist somewhere on its surface without it being boiled away or perpetually frozen. Mars is within our solar system's habitable zone, while experts disagree about whether Venus qualifies or not.

But just having the ability for water to exist really isn't enough for life. The TRAPPIST-1 star is a much weaker star than our sun. As Hugh Ross explains, TRAPPIST-1 is very small and very weak, not putting out much heat at all. Thus, the planets are a whole lot closer to their star than the Earth is to the Sun, which locks them into a non-rotational position – one side always light and extremely hot while the other is perpetually dark and continually freezing cold.

According to Ross, only the "twilight areas" of each planet would be able to support liquid water. Ross then states "Only in the twilight zone boundary between perpetual light and perpetual darkness will surface liquid water be possible. This possibility presumes that for each planet the twilight edge will not move. Given how close the planets are to one another, it is inevitable that the twilight edge on each planet will move. Thus, realistically none of TRAPPIST-1's planets are likely to ever possess any surface liquid water."4 Of course, it hasn't even been proven the planets have an atmosphere yet.

Also, since these planets must be very close to their weak sun, their years are very short: it takes only about twenty days for the furthest of the seven planets to complete an orbit and only one and a half days for the closest! Knowing how crucial seasonal changes are to life on Earth, there's absolutely no chance of seasons for any of these planets. What's worse, the planets orbits and close proximity mean their gravitational pull will affect each other. The moon's gravity causes the tides on Earth and it is only one sixth the pull of the earth's gravity.* Imagine how an equally sized planet's gravity orbiting close by would affect the Earth. Ross concludes, "These periodic gravitational influences rule out the possibility of life on these planets."


Selling the Sizzle, not the Steak

The "earth-like" description of these planets in the articles is I believe a little misleading. All the outlets I read hyped the possibility of finding life on these planets while never mentioning the incredible difficulties any life would face on them. The Vox story is a good example:


The more Earth-like exoplanets astronomers find in the galaxy, the more they update their estimates of how many Earth-like planets could be out there. "For every transiting planet found, there should be a multitude of similar planets (20–100 times more) that, seen from Earth, never pass in front of their host star," Nature reporter Ignas Snellen explains in a feature article. And the more exoplanets there are, the more likely it is that life exists on at least one of them.5 (Emphasis added).

I highlighted that last line to make a point. While it is true mathematically that finding more planets can make the odds of finding life lower, it's a bit like claiming your odds for dealing four perfect bridge hands are lower the more shuffled decks you use. It's true but still beyond any reasonable explanation that someone will do so, whether you use a hundred, a thousand or a million decks. By obscuring the difficulties these planet offer for life and only highlighting the two or three possible similarities, these reports are selling the sizzle instead of the steak. There's much we can learn from this new discovery. Learning about extra-terrestrial life forming isn't really one of them.