When Does Cultural Insanity Hit the Breaking Point? 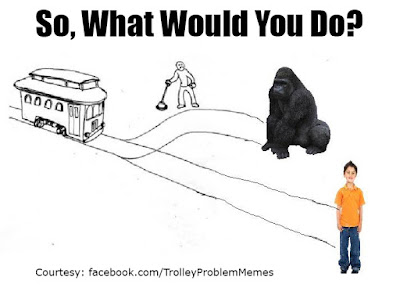 The Internet is ablaze with all kinds of opinions on about the shooting of Harambe, a seventeen-year-old gorilla zookeepers shot at the Cincinnati Zoo after the beast grabbed a three year old child who had fallen into his enclosure. Twitter showed the hashtag #JusticeForHarambe was trending over the weekend and a change.org petition entitle "Justice for Harambe" has garnered over 350,000 signatures urging that the parents of the toddler "be held accountable for the lack of supervision and negligence that caused Harambe to lose his life."1

Obviously, this only proves there are 350,000 people in the world who have never had to watch a toddler for an extended period of time.

Others are decrying the response of the zoo in shooting the ape. NBC News reported "Animal rights activists continued to protest Monday" over Harambe's death. But just what is there to protest? A child's life was in danger and the only way to guarantee his safety was to shoot the animal. This is a no-brainer, yet it has seen a significant amount of coverage and discussion across the various media outlets.

The gorilla protesters aren't a big thing by themselves. However, the event is indicative of a very scary trend that has been developing rather quickly in society. People have basically decoupled themselves from reality. We have seen it in the transgender issue where people not only wish to believe their desire is enough to change the reality of their biology; they demand that everyone else reinforce their desire. We've seen it in spoiled college kids who think if they only hear opinions and ideas about how they want the world to be, they won't be "triggered" and therefore bad things won't happen to them. We've seen it in every televised police pursuit where each felon seems to really believe that he or she can unilaterally escape an entire police squad wit radios, spike strips, and helicopters to track their every move. How do those always end?

While it's easy to point at each scenario and shake our heads, I'm wondering when will enough be enough? I understand and accept in any free society one will face competing belief systems. I think that's actually healthy. Everyone should be challenged to understand and produce reasons for the beliefs he or she holds. But that isn't what this is. We've moved from reasoning to reactionary, and from truth to tale. Just as those who use edited photos and posts to craft a non-real version of their lives on social media, there are those who now believe they can similarly shape their entire world experience.

The problem is that the real world doesn't play this game. People end up getting hurt. Zookeepers explained that tranquilizers don't work like you see in the movies. They can take up to 30 minutes to take effect. In the interim, you've just angered a 450 lb. gorilla who can crush that toddler like an empty soda can. Is that really a good plan? If it were your child, would you still advocate for it?

Reality can be hard. Ignore it and sooner or later it comes back at you like Glenn Close in Fatal Attraction, coldly asserting "I'm not going to be ignored!" If protesters were there to stand in front of the zoo marksmen, stopping them from shooting and the child died, then what? Who would be to blame then?

I applaud the zoo officials for making the right call in this instance. Human beings are more valuable than animals, full stop. If you must choose between one or the other, choose the human. That's what being civilized is.