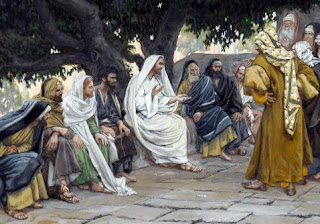 The Sadducees were unprepared. They hadn't done their homework and as a result had a mistaken view of God. As faithful followers of Christ, let us not shy away from some of the harder work of learning and developing our minds so we can more completely love our God with all that we are.
Posted by Lenny Esposito at 11:17 AM
Labels: apologetics, faith, intelligence, Internet, Jesus, knowledge, life of the church, logic