Relativism Sinks into the Quicksand of Meaninglessness

Whenever I look at the issue of moral relativism, I find that there are many different ways it doesn't make sense. The concepts of right and wrong must be grounded in something beyond our personal opinions or feelings. One of the problems of relativism is that is sinks in the quicksand of meaningless morality. Let me explain what I mean. 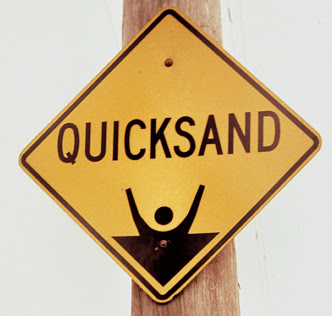 If relativism is true, then societies themselves cannot advance to the betterment of its members. There are those relativists who believe that although relativism is not based in absolute values, each person living within a social framework should obey the laws and culture that the society deems proper. Polygamy, for example, is neither right nor wrong in itself. It’s simply that some societies have a history and culture of allowing polygamous relationships and others have a history of promoting monogamous relationships. Neither is really right or wrong- They just have different cultures and each should be allowed to express their preference. They believe that morality is determined by the dictates of the society.

Relativist claim: "Each society does what is right for them and we should allow them to practice the dictates of their own culture and habits"

This is a type of cultural relativism is known as Normative relativism – meaning that whatever mores the society holds should be followed. But what about those people to rally for social change? Slavery was once the majority view in the South, so should it have therefore been left in place? If a society agrees that a practice such as slavery or infanticide is acceptable, then one cannot say abolishing those practices is the right thing to do. In fact, our society today is not better than the slave-holding south, it’s just different. Relativism without a solid foundation of objective standards quickly sinks into a quicksand of moral meaninglessness where no laws or moral frame work is better than any other.

It gets worse, though.  If morality means agreeing with whatever the society says is OK right now, then anyone who stands up to those concepts would be considered immoral since they are fighting against the majority opinion.  It makes those that would push for the rights of the downtrodden to be immoral! The abolitionist movement and Dr. Martin Luther King’s civil rights protests would be categorized as immoral actions. Concepts of justice are nullified. The idea of fair laws and unfair laws disappears. If there is no absolutes to stand upon, if everything is viewed by what society says is right right now, then fighting for improving things doesn’t make any sense.

C.S. Lewis said "A man does not call a line crooked unless he has some idea of a straight line."1 If you think about it, this is a very profound statement. There is only one way to create a straight line, you find the shortest distance between two points. However, there are many ways to be crooked: a line can have many angles, a soft arc or deviate just slightly from the intended target. Crooked lines come in all kinds of shapes, but the only thing that defines a crooked line as crooked is it is not the shortest distance between two points; it is not straight. That’s how morality works. We need to know what the objective is in order to see what deviates from it. Both individually with good and evil and as a society, an objective morality is necessary for the world to function. Otherwise we’re all slowly being pulled down by the weight of various opinions. The more people struggle to hold onto this view, the faster they sink into meaninglessness.