Do You Need Religion to Have Morals?

I recently had a friend who posted a picture to a social media site. It was an Internet meme, one of those quick little quips that have become so popular online. This one had symbols from all the larger faith systems (and a couple of lesser ones as well) with text that read "You don't need religion to have morals. If you can't determine right from wrong, then you lack empathy, not religion." Is this right? 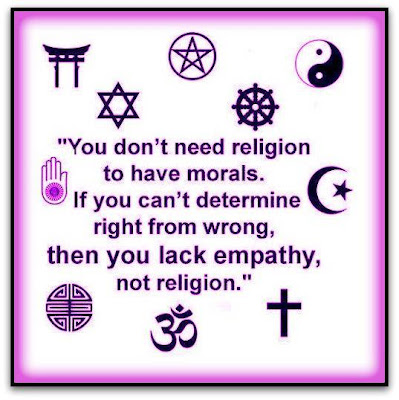 My first reaction to the post is that it reminds me of the objection I always hear when discussing moral grounding with atheists. I argue that the only way objective moral values and duties can exist is if they are grounded in God. In other words, in order for morals to be prescriptive (that is, how we should act), they must come from a lawgiver that is above humanity.

Now, most atheists misunderstand this argument and retort that even though they don't believe in God, they are moral people. But that isn't what I was trying to say.  I can freely admit that relatively speaking there are many atheists who act more uprightly than some people of faith. The question isn't if adherents to one faith (or no faith) are behaving morally. The question is how can a moral prescription such as "Thou shalt not commit adultery" be binding at all times for all people unless there is an authority higher than man who prescribes it?

And that's the real problem with this meme. Sure, we may all agree that things like torturing small children for no other purpose than one's own entertainment is wrong.  That's because the law of God is written on the hearts of all men (ref. Rom 2:15). However, the sticky part comes in when we consider moral laws like the prohibition against adultery. Is adultery wrong even if your spouse has already been cheating on you? Is adultery wrong if you both agree to be "swingers"? What if someone has enough empathy to make sure his or her spouse never finds out about the affair? Is it wrong then? Jesus placed an even higher demand on moral purity when he said that if you lust after a woman in your heart you are as guilty as if you committed adultery with her. Is that a lack of empathy?

There are other moral questions that become hopelessly confused when we rely on ourselves as the yardstick for morality. The famous Heinz dilemma is a good example:


Heinz's wife was near death, and her only hope was a drug that had been discovered by a pharmacist who was selling it for an exorbitant price. The drug cost $20,000 to make, and the pharmacist was selling it for $200,000. Heinz could only raise $50,000 and insurance wouldn't make up the difference. He offered what he had to the pharmacist, and when his offer was rejected, Heinz said he would pay the rest later. Still the pharmacist refused. In desperation, Heinz considered stealing the drug. Would it be wrong for him to do that?

One I've used before is should we harvest organs from a living inmate on death row if we can save the lives of five young individuals who are upstanding citizens? What if they are all brilliant scientists close to a cure for cancer and the inmate is a child-killer? Should we take his organs then? Right and wrong are sometimes not as clear as we like.

Above all, though, the biggest problem with the meme is that it assumes too little about morality. It ignores that recognizing and properly acknowledging God as our creator is itself a moral act. In fact, it is the first and most important of all our moral requirements – to love God with all our hearts, souls, minds, and strength. If we are not doing this then we are being immoral, we are not behaving as we ought to behave. Therefore it is impossible to be completely morally upright and shun God if God does indeed exist and as the source of the Good He deserves our worship.

Because God must exist in order to ground moral law, then one can't ignore God and still claim morality. Morality requires God's existence; since He exists it follows that one has not properly determined right from wrong if he is not recognizing Him as God. Thus, it is impossible to be irreligious and completely moral together.
Posted by Lenny Esposito at 11:50 PM
Labels: existence of God, Internet, memes, morality