Why Are Christians So Obsessed with Homosexuality?

I've spent a lot of time on university campuses lately. I get to interact with students and hear what's on their minds when it comes to questions of faith in general and Christianity in particular. Nowadays, I expect that someone will raise the issue of homosexuality, particularly the debate over homosexual marriage as we talk. It's pretty much guaranteed to come up and many times it forms the whole of my discussion with the students. Because this is such a hot-button issue, I wanted to offer a couple of thoughts on the subject that could hopefully help others when their conversations shift this way. 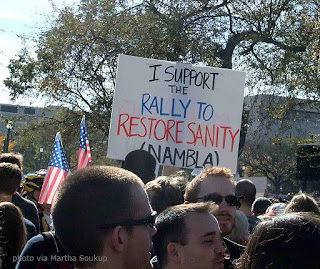 Let's start off with one objection that I hear all the time: "Why are you Christians so obsessed with homosexuality?" You can see that even online, the question gets asked a lot. Just look here, here, and here for some examples. It is a common refrain I hear from students when I've been talking with them about the state of marriage.

Why are evangelical Christians so obsessed with homosexual acts? Is it because, as some have claimed, that Christians are secretly suppressing their own homosexual attractions? Well, no. Such an assertion is ridiculous on its face. The Gallup organization estimates that 3.5% of the U.S. population identifies as homosexual. Even if we double that stat, there would only be 7% of evangelicals who would make up the constituency that hold to this supposed secret homosexual desire. Such a group could never hold the political clout to pass the traditional marriage laws that passed with solid majorities in 32 states and the federal Defense of Marriage act. This is simply a fallacy (known as tu quoue) that ignores the biological and moral arguments that Christians offer about the topic. But then why are Christians so obsessed with homosexuality?

Here's the answer: we aren't.

You may be shocked at reading that. You may disagree and think I'm dishonest. You may say that all you hear is Christians opposing the right for same sex couples to marry. But believe me, the last thing I want to do when I walk onto a college campus is to talk about homosexuality. It's not in the forefront of my mind. I'd much rather talk about Jesus, what salvation by grace really means, how God wants all people to renounce their sin whatever that may be and follow Him because He has a better way.

Those are the things I would like to talk about, and that's what Christianity has done historically. We've reached out to the poor and homeless; most churches have ministries that help these people within their community. We have looked to help orphans and sent people on missionary projects. We work to help folks overcome alcohol addiction or drug abuse. All these areas have a long, vibrant history within Christianity which is reflected both in the many efforts and ministries of the local church and para-church organizations like The Salvation Army. How many churches have a homosexuality ministry? They are nearly non-existent.

Actually it is other people who keep bringing up the issue of homosexuality. Activists want to change the definition of marriage, and they want to require Christian photographers and florists to service homosexual weddings. They sue Christian psychotherapists must not only take on homosexual patients, but affirm their actions.  They even want to indoctrinate children by rewriting state educational standards so that homosexuality is taught from the first grade. There's been a concerted effort to consciously and determinedly change our society so that homosexuality will appear as benign even though the science shows that it is nothing of the sort. It should be no surprise, then, that Christians and parents would respond.

When I'm at a university, the floor is wide open for questions. People can come up and ask anything, and they immediately latch onto homosexuality and continue to ask about it over and over. They then ask, "Why are you guys so obsessed with this subject?" I tell them I will give them an answer, but I want to know what their motivation was in asking the question in the first place. I will say, "I think that the changes that we're being asked to make as a society are serious and they require thought and care before  we simply jump into them. But realize that YOU are asking this question and I'm responding to it. You brought up the issue of homosexuality, not me."

Christianity didn't initiate this conflict. We should as thoughtful people should respond to the demands that others are making, but we've been playing defense from the start. Homosexuality wasn't even on most Christians' radar before the 1980's when the media began covering it in response to the AIDS epidemic. Then, after the assembly  175 homosexual activists into a forum they themselves dubbed " the War Conference", activists Kirk and Madsen produced a published manifesto with the goal to "desensitize, jam, and convert" the American public on the issue of homosexuality. That turned into a book which further pushed what Dr. Charles W. Socarides  called a plan "chilling in its diabolism, chilling in its hatred of straight America, chilling in its advocacy of lack of conscience, chilling in its brutal and naked lust not for sex but for power."

So, no, Christians are not obsessed with homosexuality. Homosexual activists and the media are.
Posted by Lenny Esposito at 11:48 AM
Labels: America, Christian, Christianity, culture, homosexuality, witnessing