Today is Maundy Thursday, or the celebration of the Last Supper before the Lord's crucifixion. The term Maundy seems strange to Protestant ears, but it basically means "a new commandment" and is derived from the first word of the Latin version of John 13:34 that reads "A new commandment I give to you, that you love one another: just as I have loved you, you also are to love one another." It was before the Last Supper that Jesus demonstrated His servant approach to love by washing the disciples' feet. He also establishes the sacrament of communion and stated "do this in remembrance of me." 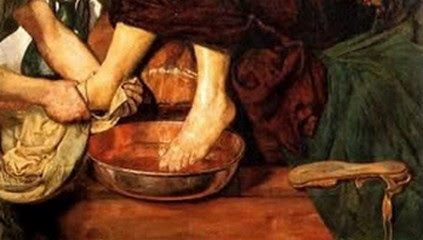 In reflecting on all this, it strikes me that ritual played an important role in the early church. Today, many evangelicals tend to shy away from ritual as some kind of remnant of the old, staid way of the denominational churches. They feel that expressions of faith should be free and heart-felt instead of scripted and that ritual became an empty substitute for a true relational interaction with God.

To some extent I understand this. I've seen more than my share of people who would go through the motions each church service thinking that's all they had to do to remain a "good Catholic" or a "good Episcopalian" or something else. There is a temptation to reduce worship to a series of movements and responses that are just as empty as any script reading.  But I think we overact when we think that ritual has no import in the life of the believer.

Human beings have always marked the most significant changes in their lives with ceremony. Think about the marriage ceremony for a moment. A wedding is one of the most important events in one's life, as it signals the bonding of two persons into a single unit, and we show this through the ritual of exchanging vows and exchanging rings. It makes a difference when you can point to that ceremony, that day, and say "here is when I entered into my new life with my spouse." Marriage is a public profession of love and a public promise of fidelity.

Similarly, Christ gave us the rituals like baptism to also mark the transition into the community of the church. He established communion for reflection on His sacrifice, so we don't forget why we follow Jesus. And He gave us the example of the foot washing to teach us how to treat one another. While many churches will perform a foot washing ceremony today, I believe that Jesus didn't want this to be only a ritual performed once a year. I think that just as our celebration of communion sharpens our focus on His death and sacrifice for us that we can then we carry with us daily, the foot washing needs to help us focus on our service to others that we may perform such on a daily basis as well.

Of communion, Spurgeon said, "Never mind that bread and wine unless you can use them as poor old folks often use their spectacles. What do they use them for? To look at? No, to look through them. So, use the bread and wine as a pair of spectacles—look through them and do not be satisfied until you can say, 'Yes, yes, I can see the Lamb of God, who takes away the sin of the world!' Then shall the Communion be really what it ought to be to you." While one would be amiss in only staring at his spectacles, one would be equally amiss in shunning them and having his viewpoint fall out of focus.

I know that I can forget about Jesus washing His disciples' feet all too easily. It's in my nature. To have a bit of ritual as a reminder can do me much good. Let's not be too hasty in throwing out such practices as so much dirty water. For in so doing, we may be tossing the thing that helps us see our relationship with God and our relationships with others more clearly.
Posted by Lenny Esposito at 12:32 PM
Labels: Christian living, communion, holidays, ritual