“For we did not follow cleverly devised tales when we made known to you the power and coming of our Lord Jesus Christ, but we were eyewitnesses of His majesty.” – 2 Peter 1:16-17

I returned last week from a 10 day trip to Israel and it was amazing. I joined Dr. William Lane Craig for his Reasonable Faith tour of the Holy land, which was guided by Sar-El Tours, whom I recommend.  The days were jam-packed and we went everywhere – from Megiddo to Mount Carmel, from Galilee to the Dead Sea, from Joppa to Jerusalem. Each day was crammed full of sites, history and biblical insights.  Here are a few of my favorites:

This was one of our first stops on the tour.  The seaside palace was built by Herod the Great as one of his living quarters.  He created an artificial port where ships could dock and take on cargo for Rome and western destinations, and built up an entertainment infrastructure to make it enticing (it isn’t only in modern times that government supports the local sports complex). The thing that moved me first, though, is seeing that it was here where the Pilate inscription was found.  Until 1961, there had been no archaeological evidence that a Roman procurator named Pilate ever existed.  We had the Biblical account and a few second-hand mentions. But, that all changed when this stone slab, which was inscribed with his name, was found here. 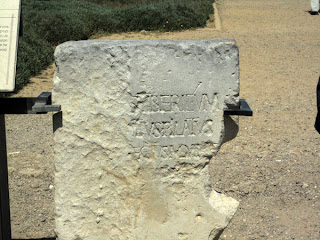 Staying at Tiberius, we awoke on day 2 and jumped on a boat to head out to the Sea of Galilee.  This was the first place where we could know that Jesus had been here. On the quiet lake, even with a bunch of other people, it was deeply moving.  We went on to Capernaum, Jesus’ base of operations and even saw what is most likely Peter’s house, where he stayed. A great time of reflection. 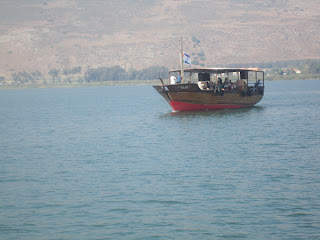 In our trek from the northern region to Jerusalem, we made a pit stop at the spring of Gideon.  Talked about in Judges 7, this is the spring where Gideon pared down his fighting force to a mere 300 men.  The passage reads "'Every one who laps the water with his tongue, as a dog laps, you shall set by himself. Likewise, every one who kneels down to drink.' And the number of those who lapped, putting their hands to their mouths, was 300 men, but all the rest of the people knelt down to drink water." I had always pictured the spring as having space around all sides, but it actually comes from a northern-facing cliff in the hill.  Judges 7:1 says the Midianite’s army was to the north, so if you knelt all the way down and put your mouth to the water, you would basically have your back to the enemy, but if you scooped up the water with your hand, you could keep an eye on the northern hillside and the enemy camp. 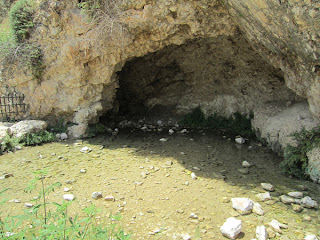 This incident – one that would have occurred in about the 12th century BC- makes much more sense once you see the actual spring. You get it.  You can see that the descriptions in the Bible do not read like the accounts of the gods on Olympus or some such mythology.  These are real places and we have real evidence.  The inconsequential details, like how people drank, are reinforced by the topography. Even history from over two and a half millennia ago rings true. It is truly an amazing land and was a remarkable trip.
Posted by Lenny Esposito at 9:36 AM
Labels: Christianity, history, inerrancy, Israel, reliability of the Bible, truth