Scientists Have Created Human-Pig Hybrids. So Now What? 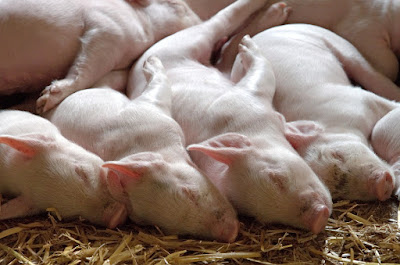 It can happen during busy news cycles that some of the more important stories are missed. That may have been the case last week as scientists announced they had successfully created a human-pig chimera embryos in what was called a "first proof" of concept by the BBC. According to the report, scientists were able to inject human stem cells into a newly-formed pig embryo and then implanted the embryo into a sow, allowing it to grow for 28 days. They then looked to see whether the human cells were growing before destroying the embryo.

The ultimate goal in these tests is not to develop some kind of hybrid monster, but to be able to grow human organs in animals for eventual transplant to patients whose organs are failing. In this specific experiment, the embryos would be considered less than one-ten thousandth human. Still, it marks the first time functioning human cells have been observed growing inside a large animal, according to Juan Carlos Izpisua Belmonte of the Salk Institute, causing other researchers to describe the published findings as "exciting."

I think this report is important for some very specific reasons. First, the idea of a human-pig chimera is shocking. It opens a lot of questions about humanity and our technical abilities. The report made it clear that this research is highly inefficient and would take many years to develop more fully. But the BBC report also noted this kind of research is "ethically charged" and offered a one-sentence disclaimer stating "There was no evidence that human cells were integrating into the early form of brain tissue." 1

The fact that our technology is progressing faster than our ability to place it in its ethical context is the biggest takeaway from the story. For those who hold to moral pragmatism—meaning the ends justify the means—then it makes sense to do whatever one wants in order to achieve a desired goal. Burt pragmatism isn’t real morality; it simply says the ends justify the means, which is a position used by tyrants.

More interestingly to me is the fact that the chimera research is a clear example of how science cannot answer all the important questions. Prof. Belmonte, who was o0ne of the researchers on the project was clear that at this time they were not allowing the embryos to grow longer than one month, as that’s all they needed to confirm development t of human cells in the pigs:


One possibility is to let these animals be born, but that is not something we should allow to happen at this point.

Not everything that science can do we should do, we are not living in a niche in lab, we live with other people - and society needs to decide what can be done.2

I’m glad to see a bit of caution in Belmonte’s words. He’s right to say not everything science can do it should. The statement really rebuts new atheists like Sam Harris, who famously argued in his book The Moral Landscape that science itself can be the foundation of morality. Well, here’s the science. Where does the morality come from? How would Harris ground any kind of moral reasoning as to whether we should do what we can do in this instance? Should we mix human and pig cells even more? What if human and pig brain cells were combined?

Ultimately, this shows that science can only tell us what is possible, not whether it should be. Moral reasoning must come a moral lawgiver, not from the fact that something can be done. Otherwise, we’ll all be left with a real Frankenstein’s monster of moral values.