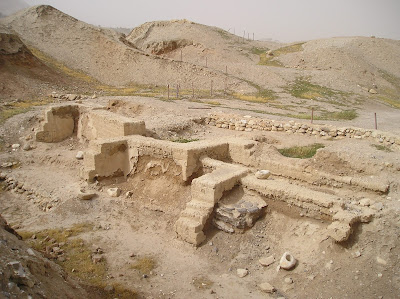 Christianity is a literate faith. By that I mean it is written accounts of the life, death, and resurrection of Jesus that are at the center of Christian belief. The Gospel accounts and Paul's writings offer specific testimony to historical events that if proven false would mean Christianity is a sham.

Because written testimony sits at the crux of Christian faith, it should come as no surprise that skeptics and critics call those written accounts into question. Many times, the doubt the critics voice is accompanied by a complaint of the lack of archaeological data. Take Resa Aslan's Zealot: The Life and Times of Jesus of Nazareth. In chapter three, he writes, "Despite the stories in the gospels about Jesus preaching in his hometown's synagogue, no archaeological evidence has been unearthed to indicate the presence of a synagogue in ancient Nazareth, though there could have been a small structure that served as such."1 Aslan also points out there have been no inscriptions found to show the general population of Nazareth as literate.

It seems Aslan chooses to offer these points in some attempt to undermine the story of Jesus announcing his Messiahship in Luke 4:16-30. Other critics have made similar moves, asking "where's the archaeology? to this or that biblical account. But lack of accepted archaeological data isn't as clear as the critics would have you believe. Craig Keener, in his massive historical assessment of the book of Acts, makes a pertinent observation:


Archaeology is, in some ways, more concrete than extant manuscripts copied and recopied from ancient originals; it provides physical evidence and sometimes (especially through burial inscriptions) the "underside" of society less apt to be preserved in literary sources. Nevertheless, it too has its limitations, not least the "muteness" of stones apart from interpretive grids often provided, at least in part, by literary sources... We further possess only a sample of even the possible physical remains, merely a portion of which have been excavated and only some of the excavations published, thus we sometimes have chance finds confirming literary records that previously were unconfirmed by such data. Some of the archaeological data and the interpretations of them for particular sites noted in this commentary will therefore undoubtedly require revision because archaeological information is always partial and open to reinterpretation when new evidence is found.2

Keener is right on target here. First, the fact is we don't have archaeological evidence for much of ancient history. Very few things can last buried in the dirt for two thousand years and the things that seem significant in our day may not be significant in that day. How do we know just how literate the people of Nazareth are in the Hebrew Scriptures when the common language was koine Greek? Most writing was placed on perishable materials.

Second, even the archaeological finds that have been investigated are not clear cut. A wall or a cup is just that. It requires the archeologist to infer things about where it was fond and why it was left there. One famous example is the supposed burial mask of Agamemnon. Archaeologist Heinrich Schliemann found a golden mask in Mycenae, Greece and claimed he found the remains of King Agamemnon spoken of in Homer's Iliad. But Schliemann's whole life was dedicated to proving the Iliad historically true and the mask dates to centuries earlier than the Trojan War. Thus, a great controversy has ensued about the mask, with modern archaeologists even questioning whether it is a fraud or not.3

Archaeology is a great tool to help investigate events of the past. The Bible has been shown to be true in many details through archaeological evidence, such as the existence of the pool of Siloam, the existence of Pontius Pilate, the existence of Belshazzar and why he is the second king,  and even Hezekiah's defiling of the pagan temples in Jerusalem. But archaeology is no more full proof that any other method of historical investigation as it needs to be interpreted and properly understood. The ancient written accounts we have help us make sense of the archaeology, just as the archaeology may help us make sense of the written accounts. But to try and call the story of Jesus into question simply because "no archaeological evidence has been unearthed" is disingenuous.