Why is the Resurrection so important?

As we prepare for Easter, I thought it would be a good time to think about the resurrection in different ways. Imagine you are part of Jesus' first disciples some 50 days after Jesus' execution. Jesus is no longer with you, and those in power are willing to execute you, or anyone else that bucks their religious establishment. Yet, you desire to go out and get other people to follow this Jesus, this supposed insurrectionist who taught what the Sanhedrin charged as blasphemy. You want to go and "make disciples of all nations." What could be so convincing that it would lead to thousands of conversions in just a few years after Jesus' death?  What testimony would be so powerful for others to believe in spite of all the negative consequences? 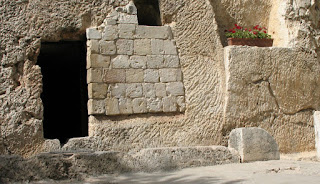 When we look at the speeches of both Peter and Paul in the New Testament we find that the one thing they always focused on in their messages is that Jesus of Nazareth was put to death, but rose again.  It is the resurrection of Christ that formed the foundation and the fuel of the new Christian faith. Everywhere the disciples went, they preached Jesus being raised from the dead, and this is what transformed Christianity form a small group of scared disciples to a world-changing faith reaching across the globe.

It's hard to not understate the importance of the resurrection to Christianity.  There's a Greek legend of the servant Damocles, who told his wealthy and prosperous king he would like nothing more than to switch places with him to enjoy the luxuries such a position affords. The king offered his throne for a single day and the servant immediately accepted. However, after taking his seat on the king's throne, Damocles saw that the king had placed a sword hanging directly over his head, suspended only by a single hair. The point was to show that the position of kingship is tenuous at best. Break that hair and Damocles' life is ended. In a similar way, Christianity's claims of authority hang by the thread of the resurrection. The Apostle Paul states this explicitly in 1 Corinthians 15 when he says:

Paul here lays out a very clear test. If Jesus was never raised from the dead, we not only have no hope in rising ourselves, but we believe in vain, we're holding onto a worthless faith. Paul even says we are akin to that person we sometimes see in Warner Brothers cartoons who thinks he's Napoleon.  If we believe in a fable that is ridiculous; we are to be most pitied among all men.

The stakes are indeed high; however I'm also comforted by them. It gives us a way to make sure that we aren't believing a lie. Unlike virtually every other world religion out there, we can investigate the claims of Christianity and dismiss it if it proves faulty. And our tests aren't based on feelings or some subjective criteria. We can look at the claims of the resurrection from the same perspective as those who study other historical events and draw well-considered conclusions. We can base our faith upon facts.
Posted by Lenny Esposito at 11:27 PM
Labels: Christianity, Easter, evidence, resurrection