Use Care, Christian, or You May be Mistaken for a Klansman 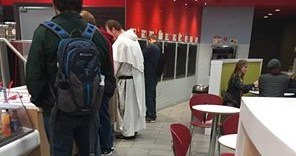 The headline read, "Indiana University Students Mistake Priest for KKK Member." Immediately, I had to know more. As Breitbart reported, several students saw a man dressed in a Dominican monk's habit with beads hanging from a long belt and began tweeting about him "to express their fear of the alleged Klansman, who they claimed was carrying a whip, and dressed in 'white robes.'" 1 The reports led residential hall advisor Ethan Gill to write a warning to IU students about the individual, as reported in the university newspaper:


There has been a person reported walking around campus in a KKK outfit holding a whip. Because the person is protected under first amendment rights, IUPD cannot remove this person from campus unless an act of violence is committed. Please PLEASE PLEASE be careful out there tonight, always be with someone and if you have no dire reason to be out of the building, I would recommend staying indoors if you're alone.

Gill would later post a retraction after he saw a picture of the individual:


This is what happens when there is miscommunication. So what happened tonight goes like this: a person saw white robes and what looked to them like a weapon, got scared (rightfully so), warned people, warned staff, which in turn caused me to warn my residents because I need to look out for my residents, which in turn made it spread.
When my residents, terrified, come running to me, saying yeah the report must be true, they saw him and couldn't believe there was a klansmember with a whip. And I see this picture. It's a priest. With a rosary. 2

Of course it would be easy to poke fun at IU students who overacted to a local priest who regularly walks the campus to pray for those enrolled. But instead of looking down on the undergrads, Christians can learn quite a bit from this incident. Here are at least three takeaways:


1. You cannot assume people today know anything about faith

We now live in a post-Christian culture, which makes things harder for Christians who want to be ambassadors for their faith. That means you shouldn't assume other people will know anything about Christianity or even what you mean by the words "faith" or "belief" as you engage in conversations about beliefs. These are constantly caricatured to mean something less than the traditional Christian understanding. Society is becoming appallingly illiterate on matters of religion, and not just the Christian faith. You need to be prepared to explain what you mean by these terms when talking with friends and family.


2. Christian customs and actions can be mistaken as a threat.

Because matters of faith are foreign to so many, it becomes wise for the Christian ambassador to proceed slowly and make sure those with whom they're speaking have a better understanding of not only what they believe, but why that belief matters. Innocuous statements or actions—like a priest walking a college campus to pray for students—can be perceived as a threat by people who in a very real way belong to another culture. Just read this reflection on Christian missionaries in India by a local Hindu to see what I mean.

This misunderstanding has far-reaching consequences, too. The current climate on religious freedom bills, like those passed in North Carolina and Mississippi, and the one vetoed in Georgia, show just how out of touch folks are with the concept of fidelity to conscience being essential to the integrity of a human being. Instead of the first freedom being necessary, they ascribe it to bigotry – a Klansman's garb.

Lastly, as missionaries in what amounts to a foreign culture, Christians really need to spend some time going out into the world and getting to know those with whom they wish to engage. Be there to listen to the questions non-Christians have. The more people interact with loving followers of Jesus who care not simply about witnessing to them but care if they passed their last midterm the fewer misunderstandings will occur. Certainly, you cannot appease everyone; there are people who want to be angry or have a political ax to grind. But you can certainly be open before people and get to know them as people. That's what Jesus did.