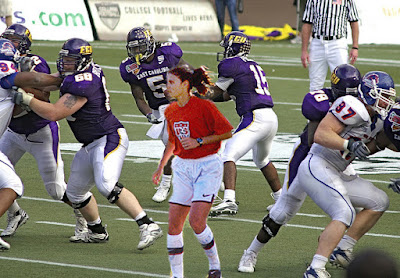 By any account, Mia Hamm is considered one of the all-time great soccer players. Twice an Olympic gold medalist and twice a World Cup winner, Hamm held the record for most goals scored in international play by a woman until fellow American Amy Wambach broke it in 2013.1 She was even named Female Athlete of the Year at the ESPY Awards.2 When Hamm stepped onto a FIFA football field, she was considered a force to be reckoned with.

However, what if the field that Hamm stepped on wasn't playing by FIFA's rules but those proscribed by the NFL? How would all of Hamm's skills and abilities be judged as she faced off against 250 lb. linebackers? Certainly some of her talents, such as her speed and playmaking vision would be valued, but her standout skills like scoring and dribbling ability would be seen as worthless. No one could see the real value in Hamm's abilities here.

The NFL and FIFA are both called football. Both have great athletes and offer fa participants wonderful opportunities to express their skills. They are, however, two completely different games and to be great in one but not the other doesn't mean you aren't a great athlete. One may be a different kind of player, but equally great at one's chosen sport.

I offer this illustration to underscore a point often missed in the gender wars. Lately there has been a lot of noise made about how women are treated unequally. Articles continue to appear complaining about the supposed wage gap between women and men, the lower percentage of women in the sciences, and even how U.S. women's professional soccer players earn only a fraction of their male counterparts. There's also much talk about how media needs to do a better job in portraying women as not simply domestics but warriors who are equally capable of taking out the bad guys in the story.

It strikes me as glaringly obvious that these efforts are using a masculine-tainted yardstick in measuring the worth of women. Alistair Roberts recently made the same point in his article "Why We Should Jettison the 'Strong Female Character'." Roberts focuses his complaint on today's media fascination with portraying women protagonists as action heroes that basically out-man men. He writes:


What is perhaps most noteworthy about most of them how much their supposed 'strength' and independence and their narrative importance often depends upon their capacity to match up to men in combat, requires the foil of male incompetence, villainy, and weakness, or involves the exhibition of traits and behaviors that are far more pronounced in men.

...Herein lies a tragic failure of imagination that weakens both men and women. Women are measured according to an unfair standard that encourages frustration and resentment, as they are pressed to play to their relative weaknesses; men, on the other hand, are ill-served as their strengths must be either pathologized, stifled, or dissembled in order to make women appear equal or stronger. Kickass princesses are an invitation to young girls to pursue their strength in a zero-sum gender game.

...The problem lies with the lack of corresponding films for women, especially films that explore what it means to be a woman who achieves full agency playing to female strengths and according to women's rules. The problem also lies with the lack of female characters that teach men to respect women as women, not only to the extent that they can play to male strengths. Without denying that some women can and do effectively play to male strengths, they should not have to do so in order to be valued as full agents. 3

Roberts goes on to offer a couple of examples to show that women can be valued for those traits where they themselves excel. He leverages Proverbs 31 to underscore his point.


What if Value Is Measured Differently?

When discussing issues of equality, I have often questioned why economic benchmarks are usually the only ones offered in the discussion. Is professional success the only valuable activity? I could just as easily say we need to measure importance by the amount of trust we place on those who are responsible for shaping and molding the most valuable assets we have: our children. Anyone can be indentured to someone else for eight hours a day, schlepping off to do another's bidding just to earn a few dollars for a scrap of bread. The true value lies in the relational bond and power that comes in teaching those who will one day shape our world.

Of course, the example above commits the same error in the other direction. Both men and women are valuable and neither should be considered replaceable. They each have strengths that by and large the other lacks, which is why we decry anyone stifling the voice of either. But let's stop claiming women are equal by telling them they must stop emphasizing those things that differentiate them from men. That isn't equality, is demanding conformity and elevating a man's playing field to judge by.