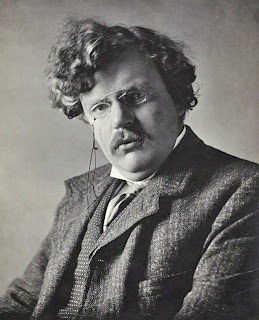 Phillip Yancey relays the story that when someone asked famous English theologian G.K. Chesterton what one book he would desire to have with him if stranded on a desert island, Chesterton matter-of-factly replied, "Why A Practical Guide to Shipbuilding," of course!1

That answer demonstrated well how Chesterton could capture the most obvious as well as the most salient points that he wished to examine. A towering intellect in the early twentieth century, his book Orthodoxy comments on many of the distinctions between culture and faith properly understood.

One of the most often quoted passages is Chesterton's examination of the contradictory messages being fostered by modern culture. Although this passage was written over 100 years ago, it’s startling to see the topics and aspects of each he captures perfectly. Chesterton writes:


For all denunciation implies a moral doctrine of some kind; and the modern revolutionist doubts not only the institution he denounces, but the doctrine by which he denounces it. Thus he writes one book complaining that imperial oppression insults the purity of women, and then he writes another book (about the sex problem) in which he insults it himself. He curses the Sultan because Christian girls lose their virginity, and then curses Mrs. Grundy because they keep it. As a politician, he will cry out that war is a waste of life, and then, as a philosopher, that all life is waste of time. A Russian pessimist will denounce a policeman for killing a peasant, and then prove by the highest philosophical principles that the peasant ought to have killed himself. A man denounces marriage as a lie, and then denounces aristocratic profligates for treating it as a lie. He calls a flag a bauble, and then blames the oppressors of Poland or Ireland because they take away that bauble. The man of this school goes first to a political meeting, where he complains that savages are treated as if they were beasts; then he takes his hat and umbrella and goes on to a scientific meeting, where he proves that they practically are beasts. In short, the modern revolutionist, being an infinite sceptic, is always engaged in undermining his own mines. In his book on politics he attacks men for trampling on morality; in his book on ethics he attacks morality for trampling on men. Therefore the modern man in revolt has become practically useless for all purposes of revolt. By rebelling against everything he has lost his right to rebel against anything.2

Here Chesterton examines how the modern society corrupts the ideas of equal rights for women, sexual purity versus promiscuity, inherent value of human life, the sanctity of the marriage covenant, the worth of national pride, and evolution versus man bearing the image of God. In all, Chesterton presents a very prescient view of modern culture.

If you haven’t yet read Orthodoxy, I encourage you to do so. Best of all, you can grab the e-book for free, since the copyright has expired and the work is in the public domain.  Just grab a version from this link.