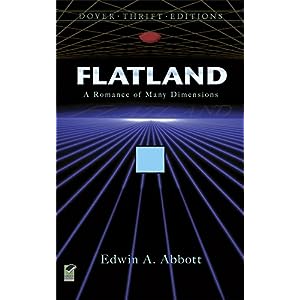 I'm continuing building my list of top books that I have found valuable in building my defense of the faith, but are not as well-known as some others.  Some are more technical or academic in nature; others are not thought of as a  teaching tool for apologists.  My next entry falls into the latter category.

Number nine in my list as a little book entitled Flatland: A Romance of Many Dimensions by Edwin Abbott Abbot.  Now, given the title, you might think that a romance book is a crazy thing to place in a list of apologetics texts, but this little work, written in 1884, is actually a scathing commentary on the  restricted class structure Abbott saw in England at the time.  What makes the book more valuable, though, is how Abbott deftly explains  why the constraint of a dimensional boundary limits the way one can understand life. Indeed, the resistance Mr. Square (our story's narrator) puts up in trying to grasp a third dimension and how being able to traverse in three dimensions would make observers in the lower dimensions react as if they were seeing a miracle. For example, a three dimensional being could seemingly miraculously "pop" into a two dimensional plane by simply rising above the plane, moving forward and then descending back into the two dimensional space again. It also brings up interesting speculations (and since they are only speculations, I won't elaborate further) of  what our resurrection bodies could be capable of.

Flatland: A Romance of Many Dimensions is truly a mind-stretching book  Best of all, since it was written nearly 130 years ago, it is in the public domain and free for download.  You can grab either the Kindle version or many other versions, including PDF to read on your device or print out. If you'd like a physical book, you can get the annotated edition from Amazon here.
Posted by Lenny Esposito at 8:54 AM
Labels: apologetics, books, study, teaching, Top Ten Neglected Books for Apologists, training