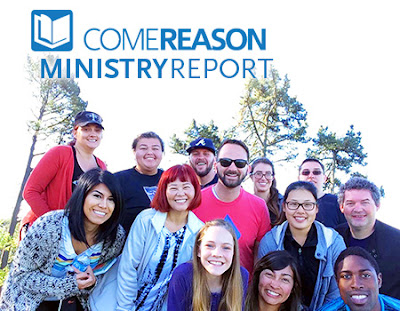 I hope you are beginning to settle in and enjoy the season of Advent. This is a special time of year, not simply because of the festivities surrounding the holidays, but because we celebrate the greatest gift, God's giving of his Son for us. What a blessing it is to recognize how a holy God would humble himself and become a man for our sakes!

It's why this time is appropriate to reflect on all the blessings that God has bestowed upon us over the year. I wanted to do just that. God has been working mightily through the ministry in 2015. Here are just a few of the highlights:

I had the opportunity to teach in several different areas of the country this year. Most notably, I was able to join Ratio Christi in their student symposium at Charlotte, NC to equip the student leaders of clubs in major secular universities on how to better defend their faith. I truly appreciate all Ratio Christi is doing and I look forward to many more years of ministry partnership.

The "Come Let Us Reason" monthly apologetics class entered its elevenths straight year at Harvest Christian Fellowship in Riverside. The church has been a blessing and I invite anyone on the Southern California area to come out to this free class (with childcare!) every second Monday of the month. You can see all the upcoming classes here. I also partnered with Pastor Daniel Eichelberger of Harvest to help teach their Deepening Your Faith series on Sunday afternoons. 2016 looks like a great lineup and you may join us for that, too!

This year, I led a group of students from Harvest on another Apologetics Missions Trip to Berkeley, CA. The interactions were great, and the students really got to sharpen their skills while witnessing to a very lost generation. I also was able to help prepare students from Upland Christian Academy on their upcoming Missions Trip. These are a special passion of mine. If you'd like to know how your church or group can participate, contact me here.

Other outreaches included moderating Dr. Hugh Ross and Dr. Fazale Rana in a discussion at the California State University San Bernardino, meeting with Harvest's The Well Club at CSUSB, and answering questions from skeptics at Riverside Community College—not once, but on two separate occasions.

My writing has been busy, especially with the daily posts at apologetics-notes.comereason.org. The blog has grown tremendously over the past year, with 50,000 visitors reading nearly 100,000 pages. Add that to the over half a million pageviews the website saw in the last year and our online  presence is making a tremendous impact in nearly every country around the world. The Come Reason Podcast has seen nearly 250,000 downloads since we began and it continues to provide fresh, relevant apologetics content every week.

On other writing projects, Sean McDowell's A New Kind of Apologist, to which I contributed a chapter, is slated to be published in March. You can pre-order copies here, and don't forget to support Come Reason Ministries by using your Amazon Smile account!

There are so many more things I can tell about the ministry that I simply don't have room here! That's why I will send out four special emails from December 28th through 31st. If you aren't on our e-mail list, you can sign up here.

I'm thankful for all the opportunities that God has placed before this ministry; I'm even more excited for the unique things that 2016 offers—more on that next month. But I would like to ask for your support. It is your gifts that provide the income which allows me to minister in these ways. As the year ends, would you consider providing a gift to Come Reason? You may give securely online here. All gifts are tax-deducible as allowed by law. I truly appreciate it and thank you for your kindness and generosity.

Our volunteers and I want to wish you the merriest of Christmases and a blessed New Year. 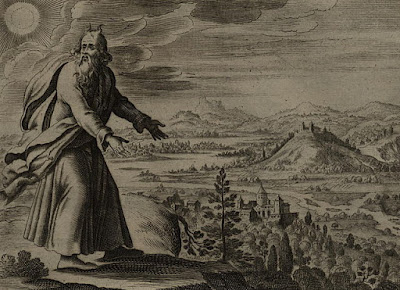 The Book of Numbers tells of Israel at a crossroads. God had rescued them from the slavery of Egypt and demonstrated His power by wiping out the Egyptian army. Now, they faced a new challenge. Now, they stood at the edge of the Promised Land, scared to enter due to the giants living there.

It was then that the faithfulness of Caleb shone so brightly. Caleb sought to rally God's people, telling them not to be afraid. With God's help, they could defeat the giants and have the future the Lord desired for them.

We live in a day where Christians fell a lot like those Israelites. We've seen the blessings of God on our land and in our culture. But that past has faded as the giants of secularism, compromise, and immorality have overwhelmed the Christian in the pew. We are standing at a crossroads and God is waiting for his faithful to take up His cause and face those giants with knowledge and compassion.

The reason Come Reason Ministries exists is to equip and strengthen God's people to answer that call. My mission is to provide a thoughtful, attractive articulation of Christ to an increasingly hostile world. As the culture shrinks into darkness, by God's grace I desire to help Christians to confidently engage those seeking to undermine His truth.

I want to see more Christians have the strength of Caleb to face the battles of today. Those who oppose the Gospel are grabbing the limelight and it's time to step up our efforts. We want to use the gifts that God has given, including this ministry, to serve his body and make an impact that cannot be ignored. We need to grow more Calebs for Christ.

Caleb made his mark on both the believer and the unbeliever and he provided a legacy for his descendants. Likewise, Come Reason's specific strategy focuses on three key areas of engagement: strengthening the Christian—especially the youth—in their ability to defend stand for their faith, reaching the lost, and ensuring the next generation of believers have the necessary tools to face their giants with confidence.

The first group of Israelites failed to enter the land of promise God had given them. They failed to reason that the God who delivered them from Pharaoh could also deliver them from the giants. Today, the church has grown soft intellectually. People don't know the reasons why they believe what they believe, making them afraid to share their faith.

We need to strengthen Christians in the pew. This means pastors need to discuss how to better defend one's faith more often from the pulpit. Youth groups need to discuss the hot-button issues and offer a regular Q&A time where students can anonymously ask about things bothering them. Apologetics classes and conferences need to be more prominent. The Church needs to help the Christian who is afraid of the giants in the land by showing them the power of God's word and his equipping.

Caleb not only encouraged his brothers, he also was a man of action. The Book of Joshua reports that when entering the land Caleb asked for the hill country, some of the most difficult terrain to conquer. Yet, he was wildly successful because he trusted in the Lord.

I want to reach the world with the message of the Gospel. That's why we leverage digital media so much at Come Reason. Our blogs, podcasts and YouTube channels are visited by thousands and thousands of people seeking answers to the big questions of life. I find myself regularly engaged in online debates with atheists and others using Twitter or Facebook. But we do it all in faith, asking the Lord to grow our efforts.

Providing for the Future

Joshua 14:14 declares “Hebron became the inheritance of Caleb the son of Jephunneh the Kenizzite to this day, because he wholly followed the Lord, the God of Israel.” Caleb provided a future for those who followed after him.

It's no secret that the church is hemorrhaging its youth. Without a specific effort to reach kids in junior high and high school, we risk losing them forever. Let's treat our youth not merely as those who seek to be entertained, but as individuals seeking to understand their faith and their world for the first time.

As an organization that has been at the forefront of the struggle for truth since the 1990s, Come Reason is uniquely poised to make a significant impact for the Kingdom. We have a vision to spread convincing Christianity across the globe by stirring the hearts and minds of the lost and the church. We've done this through our teaching, our youth training initiatives, our on-campus engagements, and our publishing efforts, each of which has been very successful given our modest budget and limited resources.

I'd like to ask you to consider supporting Come Reason in our efforts to create more Calebs. All the materials we offer free of charge, but they do cost money. Will you consider partnering with us? To help support this blog as well as out other efforts, click here to give securely. All gifts are fully deductible as allowed by law.

Let's pray for more Christians to be like Caleb. And then let's get to work making it happen.

A couple of years ago, I decided to offer a Christmas Faith-Defending Challenge, asking donors to prayerfully consider giving $25 to at least three worthy organizations dedicated to training Christians on how to "contend for the faith that was once for all delivered to the saints." While Christian apologetics is not well known in many circles, the work that these ministries do is proving more and more vital to young believers who are challenged both intellectually and morally; and challenged with an increasing intensity. Many of the organizations are quite small and every donation can make a huge difference in their ability to carry out the calling God has uniquely equipped the to do.

So look at the list below, choose three (or more if you desire) and meet the challenge! You will truly be a blessing to them and make a difference in the Kingdom.
There we are. These are ten different apologetics organizations that could really use your support. For $75 you can be a huge blessing to these organizations and also truly help advance the Christian worldview. Blessings to you this Christmas season and during the New Year. May you continue to take every thought captive for Christ.
Posted by Lenny Esposito at 2:15 PM No comments:
Labels: altruism, apologetics, Christmas, holidays, support
Older Posts Home
View mobile version
Subscribe to: Posts (Atom)