Answering "Why Does God Hate Me?" 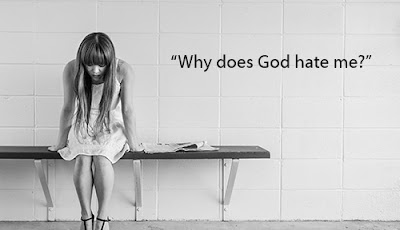 Yesterday, I wrote about an article chronicling how Google searches for God have been changing. While searches for churches have been declining, questions about God's existence and the problem of evil are increasing, making them the first and second most commonly asked questions about God on Google.1 These aren't really that surprising as the culture moves further and further away from its Christian worldview.

While questions one and two were familiar, it is the third most popular search that caught my eye. Over 1900 people a month are asking Google "Why does God hate me?" Looking beyond that specific phrase, Google's AdWords tool reports that "god hates me" is queried 880 times and "does god hate me" 590 times per month. That's over 3300 times each month people are desperate enough to go to Google and search for an answer as to why God hasn't helped them out of their problems.

These searches about the person's problematic lives are not only due to event-driven factors. The New York Times article I referred to above also notes that the most common search term to complete the phrase "Why did God make me ___?" is the word "ugly" by a wide margin.2 So, either difficult times or difficult features of one's life can prompt people to search for resolution as to why their lives are not easier than they are currently.


God Doesn't Hate You and He Proved It

First, let me say to those who are asking this question that God doesn't hate you. He really doesn't. I know exactly how it feels when life is crashing all around you and you see a glimmer of hope that somehow vanishes into thin air. You can get bitter very quickly. You see no way to escape and you become frightened. Perhaps you've prayed for a miracle, for that's all you can fathom to alleviate your suffering, but that miracle never comes.

In such situations, it's easy to turn and blame God for not rescuing you. After all, he has the power to do so. What would it cost him? But I think you know such a view is a little too easy, a little simplistic. God is not a genie in a bottle to be summoned when life gets hard. Such a God is unworthy of worship; he becomes the slave of the petitioner. Instead, God desires that you know him. Sometimes he uses the difficult times of our lives to get our attention. It was C.S. Lewis who said "Pain insists upon being attended to. God whispers to us in our pleasures, speaks in our consciences, but shouts in our pains. It is his megaphone to rouse a deaf world."3

You may ask "but how can I even trust God when he allows me to hurt so much?" That's a fair question, one that deserves a thoughtful answer. One of the ways you can tell how much a person values another is by counting what it costs him or her. In marriage, a person will sacrifice his time, his comfort and his finances for the sake of his spouse. A man who is unwilling to sacrifice his desires for his wife is selfish and a cad.

What could a relationship cost an all-powerful God? Quite a bit, actually. In order to reconcile you to himself, God sacrificed his own dear son who was crucified on a cross. As a father, I know that this is the ultimate cost; I would much rather die myself than give up my innocent child to be put to death for the sake of someone else. That means a lot. It shows that God is serious. How serious will you be about getting to know him?


Even Though God Loves You, He Won't Rescue You from All Your Troubles

I don't really fault those who seek to blame God for difficult circumstances in their lives. Many people today simply don't know enough about God to have a clear picture of him. Pain is never a pleasant thing but as I said above God is not going to come to the rescue of everyone who is in a bad situation. Any father who bails his child out of all their difficulties spoils the child and diminishes his own role. If God is shouting to us in our pain, perhaps we should look to see what we can learn from our situation. Do we place a higher value on looks than on the character of the person we should strive to be? Did we ignore God while success was easy or perhaps ignore his commands on how to live? Or did we simply ignore God until times got tough?

Every story is different, but I guarantee God wouldn't allow you to go through this period of pain unless there was a reason, even if that reason is to learn how to endure. Corrie Ten Boom had to suffer the loss of her family and the horrors of the Nazi Concentration camp Ravensbruck for saving lives of Jewish refugees. She was doing good and yet she still suffered greatly for her actions.4 She said even there she found a purpose for her suffering while in the barracks, claiming "in darkness God's truth shines most clear."5

God doesn't hate you. He gave up everything for you and wants you to draw closer to him. If you would like to do so, simply use this form to get in contact with us. We would love to hear from you.