Women in Combat or Women as Victims

One of my most visceral reactions is against those who would perpetrate violence against women. Even when young, movies such as The Burning Bed would cause me to have a strong emotional response. So, when I saw Eve Ensler's "One Billion Rising" events held this Valentine's Day, coupled with the U.S. Senate's passage of the Violence Against Women Act (VAWA), you would think I would be elated. But these events actually brought more questions to my mind than adulation, primarily due to the recent announcement by Leon Panetta to allow women to serve as combatants. It seems to me that these positions contradict each other, even as the same elected officials continue to push for both.

Let's look at Senator Kirsten Gillibrand (D-New York) as an example. Gillibrand serves on the Senate Committee on ordering the military to come up with a plan to send women into battle. In so doing, she said "Just like it was wrong to discriminate against service members because of whom they love, it is also wrong to deny combat roles to qualified women solely because of their gender." But such reasoning does not fly. Women simply don't have the upper body strength men do, and they have 30% less muscle mass overall. Now, I know that there are some women who are stronger than weak men. However, this fact is unconvincing for two reasons. One, weak men get stronger through training. Testosterone builds muscle. And those that can't strengthen themselves due to some physical ailment will usually be assigned to non-combative roles. Secondly, women's strength can atrophy faster than men's.  Marine Captain Katie Petronio, who herself has been in combat-type situations, makes this argument.

Beyond the strength issue, there's another big concern in allowing women in the military, and that is that gender matters.  Ryan Smith in the Wall Street Journal did an excellent job in painting a picture of what combat conditions really look like, as he had served as a Marine infantry squad leader in Iraq in 2003. He tells of being enclosed in a vehicle for 48 hours, urinating and defecating just inches away from fellow soldiers, then having to strip with all his comrades while his clothing was burned for decontamination.  Will women feel empowered by such actions? Will men?

Men and women also interact differently.  When polled, 17 percent of male marines would leave the service if women were placed in combat roles, their biggest concerns being "fears about being falsely accused of sexual harassment or assault, fraternization or some Marines getting preferential treatment. They also worried women would be limited because of pregnancy or personal issues that could affect the unit before they are sent to the battlefield." The truth on this matter is we simply don't know what effect a large-scale deployment of women in combat units would have.  There's no data because it has never been done before.

Then there are the larger family issues. According to this report, over 30,000 single mothers have been deployed to Iraq and Afghanistan and about 10 percent of women in the military become pregnant each year. So, female soldiers train and work alongside their male counterparts, but one in ten must be replaced so they can take maternity leave. Does that affect a unit's effectiveness? Add to that the higher divorce rate among female service members and one can see that sex makes a difference on how one processes military situations. These differences will only become more acute when more women are placed in high-pressure combat roles.

Ten months after her Senate proposal demanding women be placed in combat roles, the same Senator Gillibrand is standing before the Senate lobbying for the VAWA. "There is simply no room for partisan gamesmanship when we're talking about the safety of our families," Gillibrand said. "For millions of women and families, VAWA serves as a lifeline to keep them safe." So, Gillibrand seems to think that it is appropriate to focus on the sex of the person when worrying about the safety of women and their children. If such is the case, that standard should be applied appropriately to the question of female combatants.

It's important to realize that the Violence Against Women Act is calling for special protection for women, that a man attacking a woman needs to be categorized differently than a man attacking a man. If one were to ask why women need such special protections, the reasons listed would be pretty much the same as to those that are offered for keeping women out of combat roles. But folks like Gillibrand want it both ways. On one hand, women can do anything men can do.  Give them a gun and everyone is equal (even though combat is not simply firing a weapon.) On the other, a fight between a man and a woman isn't a fair one, so women need the protection of the law. A woman should never be punched, but its O.K. to put her in a situation where she can be killed.

Equality has never meant that we must erase our differences. God made men and women differently, and this is clear when we look at biology. Gillibrand rallies for keeping families safe, but women in combat works against that standard, not toward it.  It also does nothing to strengthen our military. Remember, the military should first and foremost be concerned with protecting our troops and winning battles. Of course we should do so in an ethical way, but I don't see barring women from combat situations any less ethical than barring asthmatics from the military altogether. If barring women from combat is somehow discriminatory, then we must judge the VAWA legislation to also be so. It is simply inconsistent to hold to both positions.
Posted by Lenny Esposito at 12:46 PM 2 comments:
Labels: culture, equality, gender roles, military

The Four Chaplains - How Religion Changes Everything 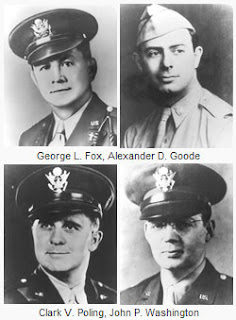 A Calvinist, a Methodist, a Catholic Priest and a Jewish Rabbi walk onto a ship… No, this is not the start of another lame joke, but a celebration of four men whose heroic actions are not remembered as much anymore.  Sixty years ago last week, at the height of conflict in World War II, these four U.S. Army chaplains engaged in an act of heroism that is scarcely seen.  As their ship sank, they took off their life vests and gave them away to soldiers on board, knowing that sinking in the frigid North Atlantic was a certain death sentence. Lt. George L. Fox, Lt. Alexander D. Goode, Lt. John P. Washington, and Lt. Clark V. Poling laid down their lives willingly as an act of service to their God and to their fellow men.

During WWII, many passenger cruise ships were converted into troop transports for the war effort.  The USAT Dorchester [1]wwas a smaller vessel, designed to carry about 314 passengers and crew up and down the East coast. After conversion, it would hold over three times more, with over 900 soldiers and ship's crew boarding on January 23, 1943 to cross the Atlantic to support the fighting in Europe.  German submarines, or U-boats, had attacked troop transports before, so the captain sailed outside the shipping lanes and had "ordered the men to sleep in their clothing and keep life jackets on. Many soldiers sleeping deep in the ship's hold disregarded the order because of the engine's heat. Others ignored it because the life jackets were uncomfortable."[2]

Early on February 3, a German submarine torpedoed the ship which was 150 miles off of Greenland. Panic ensued on board, but the chaplains sought to sooth the fears of the men. "One witness, Private William B. Bednar, found himself floating in oil-smeared water surrounded by dead bodies and debris. 'I could hear men crying, pleading, praying,' Bednar recalls. 'I could also hear the chaplains preaching courage. Their voices were the only thing that kept me going.'" [3]

Once on deck, the chaplains began passing out life jackets to the men, but found out that there were too few for all the passengers aboard. Then, as survivors Grady Clark and John Ladd reported, all four of the chaplains took off their own jackets and gave them to others. "It was the finest thing I have seen or hope to see this side of heaven," said Ladd.  The Chaplains locked arms, sang and prayed for the men as the Dorchester sank with them on board.[4]

Steven Weinberg once said "Good people can behave well and bad people can do evil; but for good people to do evil--that takes religion."[5] New Atheists such as Richard Dawkins and Christopher Hitchens decry religion as something harmful, that it "poisons everything."  Well, here is just one example of the contrary.  There were many good people on the Dorchester, many who were ready to give their lives for the war effort. But there were only four men who were so selfless that they offered others a chance at life to their own demise.  It was because of their belief in God that they did so, not in spite of it. We would do well to continue to remember these brave chaplains.

Apologetics in the Military (audio)

How is moral relativism affecting our young men and women in the armed services?  It affects them quite a bit, actually. In this interview, I talk with Ratio Christi's Keith Kendrex and Dr. Enuel Hernandez, a US Navy chaplain who works with active duty marines, about the problem of relativism as it's found in our churches and universities, and especially within the military. As reported by NBC among others, the military suicide rate hit a record high in 2012. Moral relativism is one of the crises that help propel this number ever higher.