Testing for God with Invisible Dragons 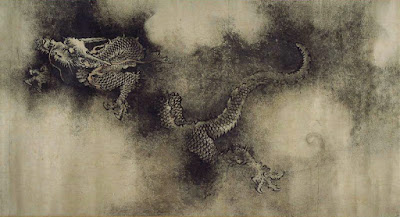 In a recent debate between David Wood and Michael Shermer, Shermer put forth Carl Sagan's invisible dragon analogy to try and claim that the idea of an immaterial being is nonsensical. You can read the entire analogy here, but the basic rundown is Sagan proposes that he hears a dragon in his garage that is invisible so you can't see it, it is incorporeal so you can't spray paint it, it is cold-blooded and spews heartless fire, so you can't detect it thermodynamically, and so on. Sagan ends his analogy by asking "Now, what's the difference between an invisible, incorporeal, floating dragon who spits heatless fire and no dragon at all?"

Sagan and Shermer both think this is some kind of killer analogy. In the debate, Shermer asks, "If it's supernatural, if it's not measurable, then how do you know it's there? You can't just say 'I feel it in my heart' or 'it seems like it should be' or one of these logical sequences of infinite regress. No, no. We need actual empirical evidence." But it's Shermer's last statement that gives him and his position away. Why must the evidence be empirical?

By claiming something must be empirically measurable, Shermer stacks the deck. Only material things can be measured in this way. But there are a lot of things we know that exist that are completely incapable of being empirically measured. The concept of the color yellow, for instance. If I ask you to think about the color yellow, you have a real thought. That thought isn't material, though. It doesn't live in my brain. If one were to be placed in an fMRI machine, the machine may give a very coarse picture of the physical result of thinking of the color yellow, but the thought itself is immaterial.

Love, right and wrong, the number 2, and the laws of logic are all immaterial, but does that mean they are the same, as Sagan would put it, as nothing at all? Of course not! These are real concepts that cannot be measured materially.

However, there exist even certain material entities that cannot be measured empirically. Take electrons or quarks for instance. These are thought to be the fundamental particles of matter, but they are invisible by definition. Similarly, no microscope no matter how powerful will ever be able to photograph an electron, since to "see" one, it must give off a photon, which causes the electron itself to move to a different orbital. Physicists infer electrons and quarks from other observable effects.

But this is exactly what Christians do with respect to God. They don't just say "there's a God" like Sagan claims of his dragon. They recognize the fact that anything exists at all needs an explanation. (And for Shermer to really avoid an infinite regress, that something must necessarily be eternal by nature.  Dragons don't fit here.) They understand that quantum vacuums are not nothing and these vacuums themselves need an explanation. They see the emergence of consciousness accidentally from non-conscious material as inexplicable. They understand concepts like love and right and wrong are real and in order to be real they need to be grounded in something that transcends people's personal opinion. They know moral laws must come from a moral lawgiver to be prescriptive. Basically, they infer God from the creation He has made and the rational working out of ideas that they recognize.

While God may not be empirically directly measurable, it doesn't mean he isn't detectable. Anyone who is open to the evidence of reason and the created cosmos can see the evidence for God. Shermer would rather build straw men out of invisible dragons. Frankly, I can't see the difference between that and him offering no reasons at all.
Posted by Lenny Esposito at 2:17 PM 4 comments:
Labels: apologetics, atheism, empiricism, existence of God
Older Posts Home
Subscribe to: Posts (Atom)