Atheists Should Admit Christianity is Different than Made-Up Faiths 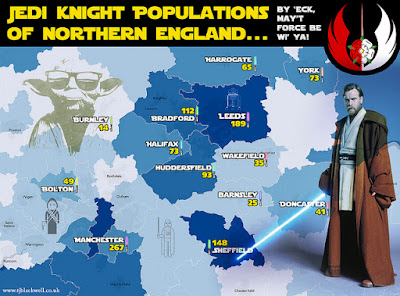 Last month, the Dublin newspaper The Evening Herald reported that fifty different official religions were given to the 2016 census takers, including one newly added category: Jedi Knight.1 This isn't really a surprise, given that since the turn of the millennium, hundreds of thousands of people across the English-speaking world have been so doing, as Wikipedia documents.2

While the number of people who list their belief system as "Jedi" or "Jedi Knight" is minute relative to the population as a whole, those that do has caused concern and not only with the census takers. The Atheist Foundation of Australia has begun a campaign telling Aussies not to mark their census with "joke answers" to the question of religion, but to mark "no religion". They even set up a web site and explain their reasoning:


What happens if I write Jedi Knight/Pastafarian?

It gets counted as 'Not defined' and is not placed in the 'No religion' category. This reduces the 'No religion' numbers and therefore advantages the religion count. While it may be funny, it is a serious mistake to answer in this way.3

Why Do You Assume Jediism is a Joke?

I think this response is fascinating because it really undermines some of the arguments atheists themselves make against the belief in God. My question is simple: why do they assume a response of Pastafarianism or Jedi Knight is not a serious answer to the faith question? What is obvious in that these answers are not to be taken seriously? What is the distinguishing feature that makes Christianity a faith that isn't a joke while Jediism is?

According the atheists, Christianity is a legend that grew from tall tales some thirty years after they were first formed. That fits with the Star Wars saga. These were incredibly popular tales that captivated the hearts and imagination of millions and now, forty years later, the Irish are marking that they are Jedi Knights. The Jedi even have a church in Wales, offering weddings and funeral services. So, what makes this different than the beliefs Christians hold today?


Christianity is Based in History

While there may be a Jedi "church" in Wales offering religious services, rational people will recognize the whole thing is kind of a put on. No one seriously believes they hold the attributes that were invented by George Lucas for the heroes of his science fiction film. Even the census respondents themselves don't believe it. Imagine those same people facing a Nero-style persecution for their identification with the Jedi faith. How many do you think would still maintain their devotion to that belief system?

The difference is that Christianity isn't based in a story without any grounding in reality. It is based on history. From its very beginning, it was the fact of the resurrection that attracted followers and changed the minds of even it most ardent enemies, like Saul of Tarsus, who couldn't deny that he saw the resurrected Christ. It changed him from a killer of Christians to an evangelist overnight.

While atheists like to claim that flying spaghetti monsters are synonymous with belief in God or mythic legends are the same as the origin of Christianity, the truth is they don't believe that to be true. Their plea that one not answer the census with something that "may be funny" but isn't what one truly believes means even the atheists can tell there's a difference. It means they need to take Christianity much more seriously than just responding with "Jesus is a myth" or Flying Spaghetti Monster memes. They certainly seem to when counting beliefs hurts their numbers.