Bill Maher Whores out the Horus Myth Against Jesus 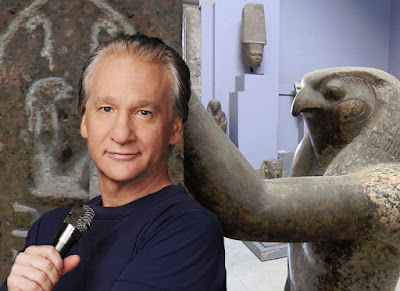 A little bit of knowledge can be a dangerous thing. That aphorism is no truer than within the new atheism where people become instant experts because they read something that sounded plausible and agreed with their biases.

Take the charge that the accounts of Jesus's life, death, and resurrection were not only not history, but they are simply a retread of the dying and rising God myths, such as the Egyptian myths concerning Horus. In his movie Religulous, prominent atheist Bill Maher confidently tells some Christians that "the Jesus story wasn't original." The film then moves to a series of texts making the following claims:


Written in 1280 BC, the Egyptian Book of the Dead describes a god, Horus… Horus is the son if the god Osirus born to a virgin mother. He was baptized in a river by Anup the Baptizer, who was later beheaded. Like Jesus, Horus was tempted while alone in the desert… healed the sick… the blind… cast out demons… and walked on water. He raised Asar from the dead. "Asar" translates to "Lasarus." Oh yeah, he also had 12 disciples. Yes, Horus was crucified first, and after three days two women announced Horus the savior of humanity had been resurrected.1

Each of these claims is overlaid on top of a movie clip where Jesus is paralleling the detail.


Which Horus is Maher Talking About?

However, there seems to be something missing from Maher's little tutorial; he offers no citations of the sources from which he's drawing his data. We're left to believe all one needs to do is pick up a translation of one Egyptian Book of the Dead and we'll have everything laid out in front of us. That's the assumption you get from what was presented, right?

You'd be incredibly wrong. Egyptian mythology isn't so neatly unpacked. Much of what was written about Horus in a systematic manner doesn't come from the Egyptians at all, but from Plutarch who wrote them some 30-60 years after the Gospels were composed. Egyptologist E.A. Wallis Budge explains:


Plutarch, as a learned man and a student of comparative religion and mythology was most anxious to understand the history of Isis and Osiris, which Greek and Roman scholars talked about freely, and which none of them comprehended, and he made enquiries of priests and others, and examined critically such information as he could obtain, believing and hoping that he would penetrate the mystery in which these gods were wrapped. As a result of his labours he collected a number of facts about the form of the Legend of Isis and Osiris as it was known to the learned men of his day, but there is no evidence that he had the slightest knowledge of the details of the original African Legend of these gods as it was known to the Egyptians, say, under the VIth Dynasty. Moreover, he never realized that the characteristics and attributes of both Isis and Osiris changed several times during the long history of Egypt, and that a thousand years before he lived the Egyptians themselves had forgotten what the original form of the legend was.2

Not only have the myths changed, but they've been mixed together, even among the Egyptian texts. John Gwyn Griffiths, in explaining some of the Horus mythology, writes "Little consistency, however, is shown with regard to the genealogy of Horus. He is described as the son of Nut, the son of Geb, and once perhaps as the son of Hathor. Sethe sees Hathor as the original mother of Horus in the Horus-nome of Damanhur-Momemphis, where she is later replaced by Isis who assumes her bovine headdress." 3 Griffiths goees on, but just in that section it sounds like Maher will have an incredibly difficult time demonstrating the December 25 birth date, the born of a virgin claim, or that he was the son of Osirus.

Just before all those assertions that Horus had the original Gospel story some 1300 years before Jesus's birth, Maher authoritatively tells his Christian interviewees how many gods of that era were bor4n on December 25 and they should really "study the religions of the Mediterranean region from a thousand years before." He seems to say they need to shed their naiveté. It is obvious, though, that Maher hasn't studied Horus at all if he thinks a quick read of the Book of the Dead will give you a 1280 BC parallel of the Gospels. You can try it yourself here.

Next time I'll look at Plutarch's version of the Horus myth to counteract any final appeals there. But I think Maher (as well as all those Internet atheists who like to parade these claims) needs to take a bit of his own advice. Perhaps he should at least look into the Horus myth before going off half-cocked with wild-eyed speculations on parallels that don't exist.