It seems the new Starbucks holiday cups are causing a bunch of Christians to see red. As first reported by the Breitbart website, the 2015 holiday cup design went with a minimalist approach, simply using a red cup with no markings other than the Starbucks logo. This is a deviation from past years where the cups featured pictures of snowmen, tree ornaments, reindeer, carolers, and snowflakes. Some immediately took the new design as a slap at Christmas. Breitbart quotes British Parliament member David Burroughs as saying, "The Starbucks coffee cup change smells more of political correctness than a consumer-led change. The public has a common sense grasp on the reality that at Christmas time, whether you have a Christian faith or not, Britain celebrates Christmas."1

Other Christians soon jumped on the bandwagon, wishing to present the cup as the latest salvo in the War on Christmas, an activity which seems to have become as much a tradition in Christian circles as Wal-Mart unveiling decorations in their stores two weeks before Halloween. One person even created a video where he "tricks" Starbucks employees into writing Merry Christmas on their cups by giving the phrase as his name when ordering.

I'm not certain such a move will cause Starbucks VPs to sit in a conference room and exclaim "Sneaky little hobbitses. Wicked, tricksy, false!" Yet, the claims of "anti-Christian" are being passed around the Internet faster than you can brew a Tall espresso, with cries of boycotts for Starbucks removing the Christian faith from Christmas. At the same time, mainstream outlets are providing additional high visibility with their stories like this one that point and mock, essentially stating, "Look at these stupid people! Aren't Christians out of touch?" 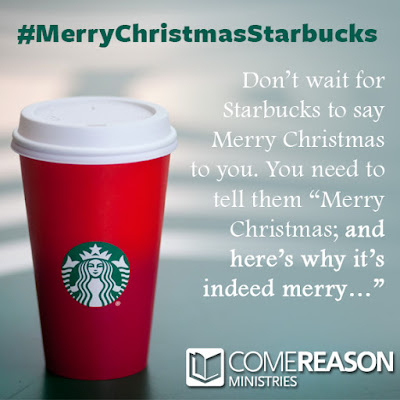 It's Not Surprising that Secular Companies Act in Secular Ways

Let's all take a breath, shall we? First, the cups. I'm not certain how having a plain red cup makes Starbucks any more anti-Christian than snowmen. Do snowflakes and reindeer signify the incarnation or are they neutral images that even atheists can use to decorate their homes? The reality is Starbucks wants people—Christians and everyone else—to get into the holiday spirit because Starbucks can sell more stuff and make more money that way. That's why they sell an Advent calendar (albeit disemboweling the word advent its meaning.) You don't need Christmas to learn that Starbucks is a secular company; their political positions demonstrate that. They commercialize Christmas because they are interested in the commercial benefits, just like almost every retail store you will come across. Plain red cups are not the issue here.

Secondly, while the corporation may be driven by the almighty dollar instead of almighty God, it doesn't mean the barista behind the bar holds those same opinions. I know Starbucks managers and baristas who love the Lord with all their hearts while working for Starbucks. You may even hear them tell you "Merry Christmas" if you gave them a chance.

Third, I think the complaint about the cups does the very thing that the Christians are supposedly rallying against: it trivializes the coming of Jesus by reducing such a monumental event of history to printing on a cup that will end up in the trash twenty minutes after it is presented. Do we need Christmas cups to celebrate God's gift of the Messiah to mankind? By winning the cup battle, will any more people come to know and trust in Jesus? How does this help our witness?

Let's face it, the early church celebrated the advent of Christ not by demanding that Roman merchants write it on their bags, but by telling others why the event is celebrated at all. Yes, Christmas is a Christian holiday; it always has been. Don't let talk of Saturnalia fool you. There is no historic support for the idea that Christmas was invented as an alternative to a pagan festival. Because it is a Christian celebration, it's OK to wrap yourself in all the traditions and trappings. But for those who are not Christian perhaps asking them why Christmas is such an important holiday would be a better approach than railing against them not having decorated enough.

How well can you explain the importance of Christmas? Are you equipped and ready to tell others why it means so much to you? Are you ready to say the Savior's coming is exciting because you desperately needed saving? By protesting and boycotting instead of changing minds and possibly changing hearts, Christians further alienate Christianity from the greater society, ironically strengthening the very problems they are complaining about.