The Implosion of Secular Colleges: When Ideas Come Home to Roost 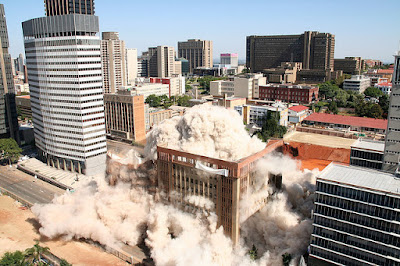 The state of higher education is changing rapidly. One cannot turn on the news or read social media without seeing all the protests and demands by students at schools like the University of Missouri, Yale, Oberlin, Ithica, and more. Some complain about being offended by epithets or Halloween costumes; others complain about a guest speaker who doesn't mirror their political or social outlook. The so-called "Million Student March" demonstrators are asking for free college education.

What's going on here?  At its base, the secular university is being eaten alive by a monster of its own making. Modern schools of higher education have been a bastion of liberal thought for about a century now. As progressives veered more and more to the left, they used the university to both teach and advance their ideas to a generation of students. Dallas Willard, in his book Renovation of the Heart, defines what I mean when I talk about these kinds of ideas and how they shaped the perceptions of individuals:


Ideas are very general models of or assumptions about reality. They are patterns of interpretation, historically developed and socially shared. They sometimes are involved with beliefs, but are much more than belief and do not depend upon it. They are ways of thinking about and interpreting things. They are so pervasive and essential to how we think about and how we approach life that we often do not even know they are there or understand when and how they are at work. Our idea system is a cultural artifact, growing up with us from earliest childhood out of the teachings, expectations, and observable behaviors of family and community.

Examples of ideas are freedom, education, happiness, "the American Dream," science, progress, death, home, the feminine or masculine, the religious, "Christian," "Muslim," church, democratic (form of government), fair, just, family, evolution, God, the secular, and so on. If you wish to see ideas in action, look closely at artistic endeavors in their various forms (especially today, movies and music, secular, and so on.

If you wish to see ideas in action, look closely at artistic endeavors in their various forms (especially today, movies and music, which encapsulate most of what is called "pop culture"), and at efforts to persuade (especially today, politics and commercials). Look, for example, at the place freedom, a major idea now, plays in automobile ads and rock lyrics. And look at our now largely paralyzed public education system to see what ideas are dominant in students and teachers.

Now, for all their importance to human life, ideas are never capable of definition or precise specification; and yet people never stop trying to define them, in their vain efforts to control them. They are broadly inclusive, historically developing ways of interpreting things and events, which, for all their power, often do not emerge into the consciousness of the individual. Therefore, it is extremely difficult for most people to recognize which ideas are governing their life and how those ideas are governing their life.

This is partly because one commonly identifies his or her own governing ideas with reality, pure and simple. Ironically, it is often people who think of themselves as "practical" or as "men of action"— both, of course, major ideas— who are most in the grip of ideas: so far in that grip that they can't be bothered to think. They simply don't know what moves them. But ideas govern them and have their consequences anyway. Another illustration of "idea grip" would be how most people think of success in life in terms of promotions and possessions. One's culture is seen most clearly in what one thinks of as "natural" and as requiring no explanation or even thought.1

The secular universities have been so effective in transferring their concepts to their students. What they never anticipated is the students would take those ideas out of the abstract and seek to apply them back to the universities and their faculty. Now you have students successfully lobbying to have university administration and faculty lose their jobs, such as has happened to the Dean at Claremont McKenna, the Chancellor and system president  at the University of Missouri,  and similar calls for faculty heads are happening at other campuses as well. Meanwhile, students want all of the benefits of higher education, including the economic advantages a degree provides, but they don't want to pay for it. Just see how confused this student is about just who is supposed to pay for her education.

In short, in the university today liberalism is taken seriously. The result is it's cannibalizing itself. This kind of attitude cannot be sustained over the course of time. If it keeps growing at its present pace, the secular university will be a shell of its former self within a decade. It has already jumped the shark in regard to its message on morality and sex.  Add to that the increasingly warped views on free speech and economic realities and a disaster of their own making is about to boil over.

For Christian schools, this is an ideal time to reclaim the legacy of higher education which has its roots in the Christian world view.  The university was our idea.  Let's take it back.