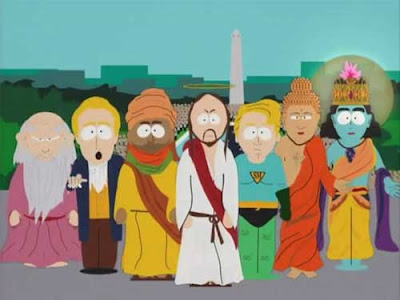 Yesterday, I wrote about how Christians must understand the essential beliefs defining Christianity. Having a strong knowledge of what delineates a Christian versus an impostor is crucial. I pointed to the Nicene Creed as a good summary of the essential beliefs Christians must hold to guard against various heresies proffered by groups who claim to be Christians, such as The Way International, Jehovah's Witnesses, and Mormons.1

Today, I'd like to begin unpacking just what some of those beliefs entail. The first sentence of the Creed reads:


I believe in one God, the Father Almighty, Maker of heaven and earth, and of all things visible and invisible.2

While the sentence is short, it packs within it an amazing amount of theology. It teaches that God must be singular, God must be creator, and God must be eternal and separate from his creation. These attributes of God are not only logically coherent, but they do a lot of work at eliminating may other faith systems.

The first foundational belief Christians hold is there is one God and only one God. I've explored this concept here, explaining that “for God to be Almighty God, He has to be a single being.”3 The fact that God cannot have an equal rules out Eastern faiths such as certain forms of Hinduism, Mithraism, and more modern faiths like Mormonism.

Not only must God be a single being, he is recognized as the creator of everything else. God cannot be God is he is merely a part of something bigger because just like polytheism above, it robs him of his supremacy. God can never be a part of a larger whole. Given this, we know God is therefore self-existent. He needs nothing or no one else.

Only God has this attribute. All other things are contingent. They rely on someone or something to create them or to empower them. The universe is running out of time and energy, therefore it must have been wound up a particular point in the past. The universe cannot exist for eternity because its energy would have been depleted an eternity ago. Further, the universe is inside time itself, and the existence of time needs explaining as much as the existence of matter.

We describe the created universe as matter, energy, space, and time. We've said that those things that have a beginning, like our universe, need a creator to explain their existence. However, for God to be God, he cannot rely upon any kind of creator. Therefore, God must have never begun to exist. God is by definition uncreated and eternal. He has no beginning and no end.

Given each of the points above, we can know that God is transcendent. In other words, God is separate from his creation. He did not need to create the universe and could have existed just fine for eternity without creating it. The doctrine of God's transcendence is an important one and rules out most other Eastern faiths. Beliefs that hold to a concept that where God is either inside his creation (panentheistic faiths such as Buddhism, other forms of Hinduism, animistic faiths like those African tribes or Native Americans held) or faiths that believe all is God (pantheistic faiths such as Taoism and Vedanta Hinduism) fail here.

In understanding what God must be, one can effectively eliminate all belief systems that are not monotheistic as being logically inconsistent. The Nicene Creed gets the concept of God right in its very first sentence and screens out not only those belief systems mentioned above but other faiths like Mormonism with its unending generations of exalted beings or Christian Science which is ultimately pantheistic.4 If God is to be God, he must be almighty, maker of heaven and earth, eternal, and transcendent. Spaghetti monsters or flying teapots won't cut it. Anything less is not God.

1. Esposito, Lenny. "How to Spot Impostor Christianity." Come Reason's Apologetics Notes. Come Reason Ministries, 21 July 2015. Web. 22 July 2015. http://apologetics-notes.comereason.org/2015/07/how-to-spot-impostor-christianity.html.
2. "Nicene Creed." Christian Classics Ethereal Library. Christian Classics Ethereal Library, n.d. Web. 22 July 2015. https://www.ccel.org/creeds/nicene.creed.html.
3. Esposito, Lenny. " A Christian Must Believe There is One God." Come Reason's Apologetics Notes. Come Reason Ministries, 15 May 2014. Web. 22 July 2015. http://apologetics-notes.comereason.org/2014/05/a-christian-must-believe-there-is-one.html
4. Mary Baker Eddy taught "There is no life, truth, intelligence, nor substance in matter. All is infinite Mind and its infinite manifestation, for God is All-in-all. Spirit is immortal Truth; matter is mortal error. Spirit is the real and eternal; matter is the unreal and temporal. Spirit is God, and man is his image and likeness. Therefore man is not material; he is spiritual," (Eddy, Mary Baker. Miscellaneous Writings. 1883-1896. Boston: Trustees under with Will of Mary Baker, G. Eddy, 1924. Print. 21.)