Atheists Contradict Themselves by Seeking Invocations 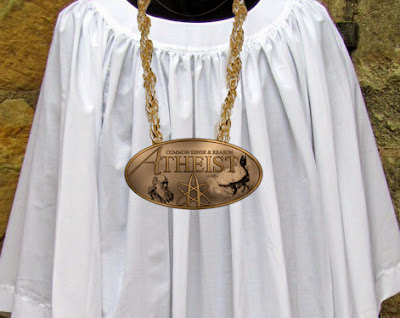 Many times when I have debated atheists, they assert that they don't need to prove their atheism. As Richard Carrier put it, "It is not necessarily incumbent upon me to provide evidence for atheism. I mean if we say that aliens don't exist, then I don't have to prove to you that they don't exist; rather, you need to prove to me they do, or that there are fairies in the woods or demons or so forth. The claimant has to actually establish the fact."1 The common refrain that atheism is not a belief but simply a lack of belief shows up over and over, even though atheists are making a truth-claim about the world.

Here's the interesting thing, though. When placed in other contexts, atheists themselves deny this position. Take government meetings as an example. After the Supreme Court ruled earlier this year in Greece v. Galloway that opening local legislative meetings in prayer was constitutional2, the Central Florida Freethought Community took a different tack; they decided to petition to offer invocations at various government meetings, even providing a model letter so that other atheist groups could do likewise.

Justice Kennedy, in writing for the majority on Greece v. Galloway, captured the purpose of offering an invocation:

The principal audience for these invocations is not, indeed, the public but lawmakers themselves, who may find that a moment of prayer or quiet reflection sets the mind to a higher purpose and thereby eases the task of governing…

The inclusion of a brief, ceremonial prayer as part of a larger exercise in civic recognition suggests that its purpose and effect are to acknowledge religious leaders and the institutions they represent rather than to exclude or coerce nonbelievers.

Ceremonial prayer is but a recognition that, since this Nation was founded and until the present day, many Americans deem that their own existence must be understood by precepts far beyond the authority of government to alter or define and that willing participation can be done with a brief acknowledgement of their belief in a higher power, always with due respect for those who adhere to other beliefs. 3

But this is exactly where the atheist has a problem. If an invocation is to point to a higher purpose and to recognize specific religious beliefs, then it follows that invocations are ways of communicating a faith, which means that there are real claims being made about the nature of the world. The freethinkers, in asking to offer invocations, are asserting a belief system. Therefore, to claim that they bear no burden of proof is absurd.

Imagine a group petitioning a city council to provide an invocation on the grounds that there are no aliens or fairies in the world. They would immediately be rejected because the fact that they don't believe such things cannot support any kind of meaningful invocation. It would do exactly what Kennedy said invocations shouldn't: it would mock other belief systems.

Atheists here are caught in a contradiction. Either they are simply holding to the non-existence of an entity or they are advancing a particular belief system, complete with claims about man, the universe, origins, morality, and the nature of reality. They can't have it both ways. Seeking invocation opportunities betrays the atheist's claim that they simply lack belief. it's a contradiction, and contradictions about the fundamental nature of a worldview by its adherents underscore its implausibility.