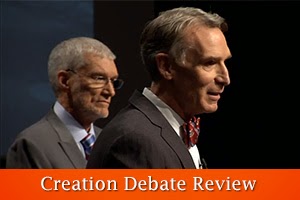 Yesterday, Ken Ham and Bill Nye debated their concepts of creation and evolution at Ham's Creation Museum in Petersburg, Ky. I watched the debate live with a group at a local church (you can watch a recording for a few more days here), and given that there were nearly 500,000 streams of the event around the globe, it would be easy to estimate that well over half a million people viewed the exchange. Many have commented on the event, but as someone who has previously participated in a formal debate, I thought I would put down some of my observations here.

I thought the debate was very well run and it went better than I expected. Both Mr. Ham and Mr. Nye were respectful in tone and were genuine in their approaches. I think each participant understood that this event was important and each wanted to make his best case. CNN's Tom Foreman moderated and did an excellent job as well.

The debate platform was clean and the podiums for the speakers were spaced comfortably for both audience viewing and the television cameras to get a two-shot. (The graphics on the front of the podiums were my favorite part.) Using a pre-submitted set of questions from the audience allowed the Q & A time to flow quickly and more questions were presented in the 45 minute allotment than could be had with a queue in front of microphones.

I thought some of Bill Nye's arguments concerning the ice core evidence for 680,000 of winter/summer cycles and the abundance of species variation that argues against such diversification taking place in only a few thousand years were his strongest points. I thought that Ham did a great job in showing how science education today does hold a bias against a creator, even including a clip from a previous interview Bill Nye did. He was particularly strong when referencing a new study that shows all dogs came from a single ancestor and declaring how changes in finch beaks are variations within an instruction set. He also notes that cave fish "evolving" to have no eyes is not a net gain; there is no new information there. The fish have only lost the capability of seeing. Ham was also bold enough to present the gospel a few times during the evening, which I appreciated.

The most unfortunate thing in this debate is that neither debater focused on the actual debate question! At the beginning of the debate, Foreman clearly stated that the debate question was "Is creation a viable model of origins in today's modern scientific era?" Ham was to argue the affirmative and Nye was to take up the negative. Neither person in their initial opening five minute speech nor in their longer thirty minute second presentations built an argument focused on this question. Ham continually claimed that one must start with certain assumptions when trying to understand the past. However, this doesn't address whether or not creationism is a viable model. Several times throughout the night he highlighted scientists who were also creationists, although most of those had specialties that had nothing to do with creationism or evolution at all. If the debate question were "can good scientist hold to a creation model?" this would be prime evidence. Alas, that was not the topic at hand.

Nye actually changed the question when he began his 30 minute presentation. He begins by saying, "Let's take it back to the question at hand. Does Ken Ham's creation model hold up?" What? Is that now the topic of the debate? If so, I wouldn't have bothered watching because I'm not interested in Ham's version. Nye offered several strange lines of evidence, such as the shipbuilding capabilities of Noah and his family. Huh? What in the world does that have to do with creation as a viable model in science? In any account of Noah and the flood, the creation has already been established.

Nye also went off on a tangent about fish reproducing asexually versus sexually with others. He notes how asexual reproduction is less desirous but sometimes necessary (that's a straight line for too many jokes.) But again, how does this prove or disprove the question at hand? Could the fish not be designed for such contingencies? It shows neither evolution nor creation but the fact that certain fish in a certain environment have the capability to reproduce asexually. There are other animals that reproduce asexually, too. This completely misses the question.

Neither presenter provided an actual argument—you know, a series of premises and a conclusion—that I would have expected in a debate. It would have been a much more powerful presentation had the opponents laid out their arguments first and then expounded on them. And it was clear that both presenters were guilty of something I've stressed before: creation conflation.

There were a few missed opportunities in the debate that could have been capitalized on. The first is Nye's claim that if you can find "even one example" of a fossil crossing layers you would change science forever and "the scientists of the world would embrace you." Well, polystrate fossils have been well-documented, and it hasn't led the scientific community to embrace creationism. There are simply new theories that justify the find as a natural, not a supernatural occurrence.

The point that made me laugh out loud, though, was how Nye insisted that scientist WANT to embrace new ideas. We know that scientists resist upsetting their current models, as this 1961 article from Science shows. The more relevant work is that of Thomas Kuhn. In his book The Structure of Scientific Revolutions, Kuhn demonstrates how the history of science is not one gradually increasing understanding of the world, but it is more how a certain model becomes the status quo and is accepted until someone (whom Kuhn labels "an outsider") upsets the status quo by offering a new paradigm. Thus science advancement comes in fits and stages as those who hold the existing model are forced to give way to the newer paradigm.

Two examples of Kuhn's paradigm shifts were items that Bill Nye mentioned in the debate: the emergence of plate tectonics and the abandonment of spontaneous generation after Louis Pasteur's experiments. Another I could add was the emergence of the Big Bang model from the previous steady state theory of the universe. Like the other models, the theory was not met with open arms by the scientific community, but by much resistance. Nye seemed to imply that Fred Hoyle liked the idea, when he actually named it in derision and was one of its most vocal opponents. Though it was first proposed by Roman Catholic priest Georges Lemaître in 1927, it took Wilson and Penzias' discovery of the cosmic background radiation in the 1960's that led it to be the primarily accepted model among cosmologists.

Another wince-inducing point was how Nye tried to assert that the Biblical text was transmitted to us through a method like the telephone game. This is simply, demonstrably false and even non-believing scholars flatly reject such an assertion.

Ham had some egregious moments as well. When he for the third and fourth time referred to his small sampling of scientists who were also creationists, his argument moved from a non-sequitur to a fallacious appeal to authority, and it became annoying from the audience's standpoint. Ham never answered Nye's stronger points above, but simply dismissed them with the rhetorical "how do we know, we didn't see it!" Well, if that's the criteria for knowledge about historical events, then we need to fire all the CSI lab technicians and set the murderers free.

Ham also lost points in my opinion when he was asked if he was provided evidence, would he still believe in God. Instead of beginning with the historical fact of the resurrection of Jesus, Ham stated that everyone has to have certain presuppositions and the Bible was his presuppositional choice. But doesn't that beg the question? Nye similarly begged the question when asked about things like the emergence of consciousness or how the Big Bang happened from nothing. He simply claimed these were "great mysteries" and we should be glad they are there to study.

The final question of the night, "What is the one thing, more than anything else, upon which you base your belief" was offered to both participants and they basically responded the same way they had been all night long. Ham said one must presuppose the truth of the Bible in order to know history and origins. Nye answered that he based his beliefs on the joy and love he receives from the information and the process of science. Their presuppositions are noted, but each is rather subjective. I know that many creationists also feel Nye's excitement and love of scientific discovery. I know there are many other people who presuppose the Qur'an, the Book of Mormon, or some other text as their starting point for interpreting history and creation. Neither answer satisfies a seeker who is honestly trying to make heads or tails out of all this, and while this question may be tangential in itself, neither response helps us answer the question of the debate.

In all, I am truly excited that the interest in this debate was so high. I think there are many, many people who really want to discover the facts that are out there and that we as Christian communicators can find fruitful ground in providing some of those answers. There are a lot of holes left open by the participants in the debate. Let's see if we can go out and close some of them with good evidence.
Posted by Lenny Esposito at 1:34 PM
Labels: beliefs, Bible, creation, debate, evolution, science, worldview